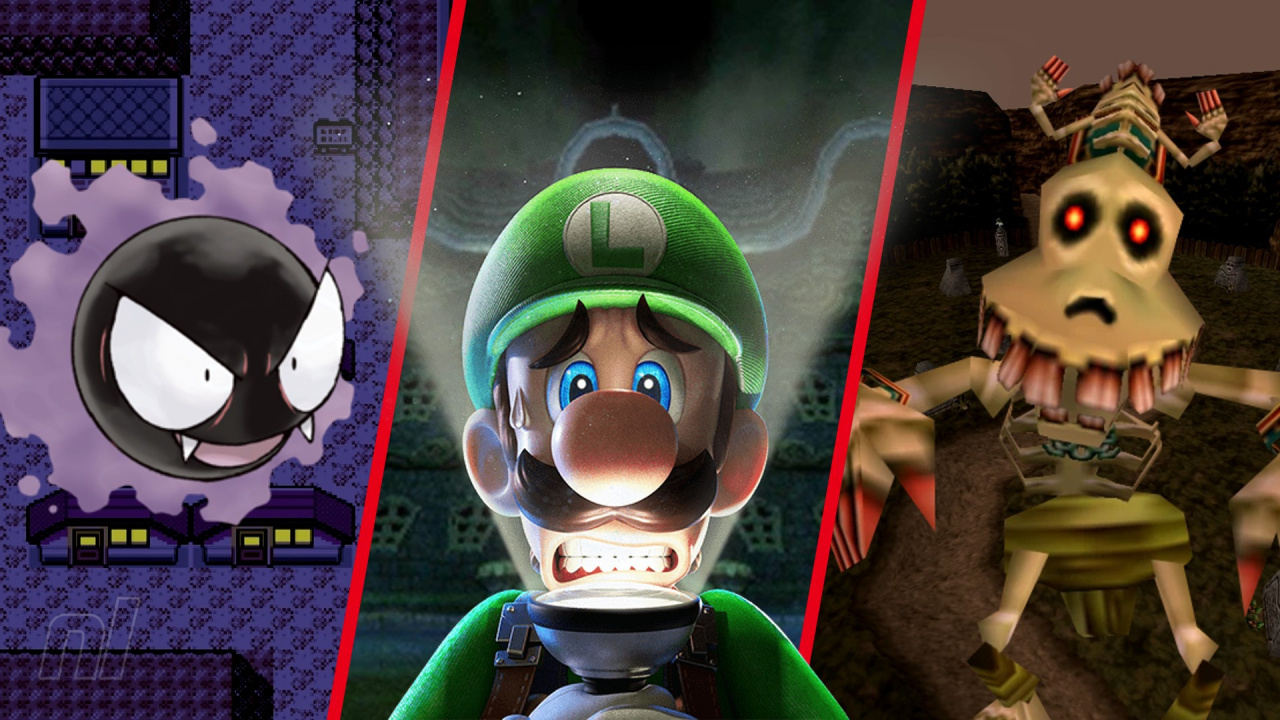 It is almost Halloween! Or, well, it was when we wrote this — but the Halloween spirit lives on all year long for some of us. Whether you’re looking for a playlist to have on in the background of your Halloween party, or you just really love to live life on the edge of your seat by listening to creepy songs in the daytime, then we have the playlist for you!

We asked around the office to see what Nintendo Life staffers’ personal picks are for music that gets them feeling nervous, and together we built a list that ranges from “designed to be scary” to the sort of songs that are only scary because of the context.

Including all your favourite tracks from Pokémon, Mario, Zelda, and more, this playlist is exactly what you need to set the mood… as long as that mood is “I need to change into my brown trousers”. Good luck!

Sitting down to write words for my nominations, I realised that my picks are more haunting and melancholic than downright think-I’m-gonna-have-a-trouser-accident scary. It does get full-on creepy about halfway through, but this one certainly starts off plaintive as you watch a rough hewn but extremely effective tableau of happier times for the villager folk before Las Plagas descended on them. Having witnessed and fought through the horrors that would come, it’s a deeply affecting sequence and one that has stayed with me. GL

Resi 4 is extreeeeemely melancholic, but yeah… is there anything sadder/creepier than a slideshow of all the people you just stabbed in the face to get Ashley back? Was it worth it, Leon? Was it??? KG

Hear it in: Resident Evil 4

You could argue that Luigi’s Mansion isn’t very spooky, but there was just something about the GameCube original that really put us in the oversized shoes of Luigi. His off-kilter humming just heightens the tension on this bassy, sparse tune; you can’t help but feel on edge while you wait for the next horrible ghost to frighten your overalls off. KG

Hear it in: Luigi’s Mansion

Fez is a nice, relaxing game about a lil guy exploring the world through platforming, right? WRONG. It is also about being scared out of your socks by cosmic horror and the yawning void of existential fear. Disasterpeace’s track here is used for a particularly tricky late-game door puzzle, and by this point, you’ll most likely be freaking out that the story goes much, much deeper than you realised. Cubes are just the beginning, man. KG

Hear it in: Fez

Again, ‘spooky’ isn’t quite the right word to describe this incredible track. It’s a kaleidoscope of sound that beautifully mirrors the surreal and subtle danger of the first ‘proper’ dungeon you encounter as an adult in the game. It’s rattling and haunting, but also wondrous; Koji Kondo captures the majesty and terror of the Forest Temple and sets the tone for the epic quest ahead. GL

You might argue that the areas that are supposed to be scary — specifically, Under The Well and the Shadow Temple — have creepier music than the Forest Temple, but there’s something extra-unnerving about an area that’s supposed to be relatively tame having really spooky music. I mean, it’s the first temple! Calm down, Koji! KG

You thought we wouldn’t have Lavender Town on here? Of course we do — it’s the song so spooky that it spawned tons of playground rumours about people whose eyes fell out and whose souls were reaped by a vengeful Raticate ghost or whatever. It’s horrible, but it does exactly what it means to: creep out a generation of unsuspecting kids. Boop-boop-beep-boop. However, I’m inclined to argue that this one is creepier precisely because of the playground rumours. There’s nothing worse than music that has a bunch of urban legends tied to it. KG

Hear it in: Pokémon Red and Blue, Pokémon FireRed and LeafGreen, Pokémon Gold and Silver, Pokémon HeartGold and SoulSilver (although it’s WAY less scary in this last version. Booo.)

There’s something about extremely lo-fi music that gives me the willies. Just like watching black-and-white TV meant having to use your imagination to fill in the colour, SNES games wormed their way into your head to create something far larger than the pixels on-screen and the relatively basic music that accompanied each level. Koji Kondo’s Castle Theme is a great example: foreboding, bassy, and a fantastic match to the castle levels, which required you to leave poor Yoshi outside because it’s just too dangerous for a little dinosaur. Those restrained, muted repetitive notes are an excellent use of the fairly limited musical tools that Kondo had to hand at the time. Bravo. KG

Hear it in: Super Mario World

If you like being terrified and have a fondness for the original Alien movie, then Alien: Isolation is an absolute must-have (with a particularly good Switch port). You spend large parts of the game creeping around desperately avoiding the Alien, recreating the horror and fear that typified the film. Its music, like the broader sound design, is outstanding. What’s particularly interesting with the soundtrack is that it is very dynamic, smartly adjusting to the randomised elements of a playthough (for example whether the Alien gets a jump on you). There’s no fixed soundtrack as such, but fans have produced some excellent cuts for our listening pleasure. It’s all incredibly atmospheric, but a track simply called ‘Alien’ seemed like a sensible choice! TW

Hear it in: Alien: Isolation

It’s hard to pick the spookiest song from the spookiest Zelda game of all time, but Ikana Valley is an easy choice once you realise that both the song and the place are deliberate combinations of all the scariest parts of Zelda. Just as the cursed Ikana Canyon piles it on thick with a graveyard, a well, Gibdos, Poes, ReDeads, and tons of skeletons, so too does the music: the droning is straight from Temple of Time, the unsettling ocarina foreshadows the Elegy of Emptiness, and there’s even some Malon-like singing which recalls Romani Ranch, the warped mirror of Ocarina of Time’s Lon Lon Ranch. What a song. I hate it. KG

The best part of this deeply unnerving track is that it uses science to creep you out. The endless staircase in Peach’s Castle is meant to be a sort of trap, for if Mario has fewer than 70 Power Stars, the stairs will just go on forever. To match the endless looping of the stairs, the music itself is an endless loop, using something called the Shepard tone illusion. It sounds like it’s always going up, even though it’s actually just a bunch of notes played to make you think it’s always going up — but knowing the science behind it doesn’t make it any less spine-tingling. KG

This may seem like a punt, be bear with me. The Banner Saga Trilogy is a fascinating set of games that is consistently making you feel dread, putting you up against increasingly difficult odds as world-ending events unfold. It does this with an incredible soundtrack backing it up, strengthened by a live band performance. In the third game the sense of an ominous darkness reaches a peak, and this track reflects a moment where you descend even deeper. Not necessarily ‘spooky’ on its own, but in the context of this series’ epic quest it’s an ominous variation on the main musical theme. TW

Mad Monster Mansion is the obvious go-to for creepy Banjo-Kazooie music from maestro Grant Kirkhope, but in keeping with the off-kilter picks I’ve got going here, I’ve chosen the brilliant Isle o’ Hags overworld theme from the sequel. By using the same 6/8 rhythm, Kirkhope echoed the feeling of Grunty’s Lair while bringing a more er, I mean spooky tone to the darker second game. It’s more Brothers Grimm than nursery rhyme, although it’s still got bounce and I adore it. Rumours that I assembled many years ago a 25-minute super cut which includes all the different area variants are entirely spurious. It’s 26 minutes, actually. GL

Hear it in: Banjo-Tooie

Considering it’s been such a hot release this year and has Dread in the title, we had to feature the latest Metroid game. It’s an atmospheric experience, so you could certainly take your pick in terms of tracks. We’ve opted for a part relatively early in the game as you arrive in an area that has no power. Though you’ve gained a few powers you’re still pretty vulnerable, so entering a space that is practically pitch black leads to plenty of tension. There’s a consistent deep, otherworldly and rhythmic ‘growl’ throughout, with some classic sci-fi vibes mixed in. TW

Hear it in: Metroid Dread

In Minecraft, there are two different soundtracks: The songs that play as you explore, and the songs that you can only find as “discs” in the world. They’re extremely rare, hard to find, and range from lovely songs like Cat and Pigstep to horrifyingly eerie ones like 13. You could potentially argue that the disc known only as “11” is the creepiest, but it’s less of a song and more of a series of creepy noises, so 13 is the winner here, thanks to its use of bells, reverb, and binaural panning that makes you feel like you’re actually in a cave, and something bad is about to happen. Thanks for the nightmares, C418! KG

Hear it in: Minecraft

One man’s scary is another man’s… not scary, of course, so do let us know your thoughts (and personal picks!) in the comments. And have a very happy/haunted Halloween, unless you’re reading this when it’s not Halloween, in which case… have a nice day!

Hospital Fires Diversity Officer For Being 'Too Sensitive About Race'