Plywood furniture and vibrant colours feature in the headquarters for one of Brazil‘s major publishers, which has been overhauled by architecture office Studio Dlux.

The studio renovated the 595-square-metre office for Grupo Editorial Record, which is spread across several floors in a 1980s block in the São Cristóvão neighbourhood of Rio de Janeiro.

Local firm Studio Dlux was initially hired to renovate a single level, but after a careful analysis of the company’s needs, the project was expanded to two floors.

“The project became a more strategic proposal to reformulate the division of workspaces in some sectors of the company – editorial and marketing,” the firm said.

“The project that once was designed just to modernise the space ended up changing the Group’s thinking in relation to workspaces and promoted a behavioural change.” 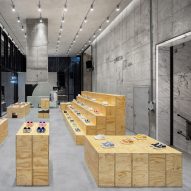 The editorial department is located on the third floor, while the marketing group is housed on the fourth. Overall, the team sought to create a brighter and more open atmosphere on both levels, which were formerly dark and cramped.

On the third floor, the layout was totally reconfigured. In the past, different book groups were separated from one another. To foster collaboration, the architects removed partitions and created a central, open area with shared workstations.

The central zone is ringed by private offices enclosed within glass walls. The glazing provides transparency and enables light to flow in through perimeter windows.

“This layout contributed to the symmetry that Grupo Record sought so that all editors could see each other and have the privacy for some more strategic meetings,” the team said.

A similar layout strategy was used on the fourth floor. One small difference is the function of the enclosed rooms, which serve as both offices and meeting spaces.

Each level also has a kitchen and dining area, which are referred to as “decompression zones”. Suspended over a dining table is a wooden lighting installation that can hold potted plants.

Pops of colour help enliven the office environment. A deep sky blue was used on the third floor, while orange and seafoam green were used upstairs. The colours were chosen in collaboration with the company’s employees.

The project’s simple finishes include vinyl flooring and white drywall. Plywood was used to fabricate built-in furniture and desks. Electrical cords are held within painted pipes that run up to the ceiling.

The project also entailed a full upgrade of the building’s infrastructure.

Other projects by Studio Dlux include the conversion of an event space in Curitiba into a school featuring a multicoloured playground and a vaulted ceiling that looks like a starry sky.

Photography is by Dhani Borges.

Keyshia Cole Breaks Silence On The Passing of Her Mother Frankie Lons: 'This Is So Hard'