It’s been a few days since the first three Final Fantasy Pixel Remasters hit Steam and mobile devices, and I’ve had a chance to play through the first title – and I’m absolutely going to be hitting the others. Yes, even 2. While they’re not perfect, they are vastly superior to most of the options that players had to go back and play these classics, and they may eventually be regarded as the definitive editions. Yes, the font is a little off-putting at first, but that can be swapped out in about three seconds, and I also found that I just got used to it after a few hours.

In the case of Final Fantasy 1, it’s quite faithful to the original game with some alterations here and there. Sure, you can get ethers so if you want to play a magic-centric party you won’t find yourself out of spells when you hit a critical boss or you’re tackling an extended dungeon crawl. Yeah, the big bad at the end is definitely not the NES version. And there are various tweaks and foibles throughout, but at the end of the day, it feels adherent to the original experience I had on a crummy TV decades ago, while at the same time serving up some minor quality of life upgrades. Perhaps the best thing about this entire series of remasters so far is the absolutely incredible music. 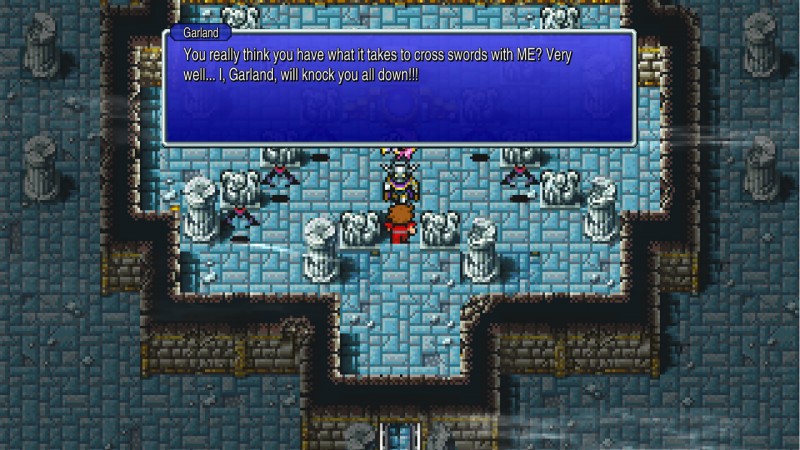 Nobuo Uematsu’s remastered and rearranged musical tracks from these games are worth the ticket of admission alone, in my opinion. While these tunes were always iconic, they absolutely slam with incredible instrumentals now, from the basic battle theme to the banging sounds of the Chaos Shrine. If there is any singular element that makes these games worth going back to and exploring today, these tracks are breathtaking and astonishing in their modern incarnations. You very well may find yourself stepping back from the controller and taking them in. I know I have.

Other small elements include an auto-battle function to help grind out those extra levels for taking on tough bosses with fun party compositions like 4 monks or 4 white mages. There’s also a super handy minimap. sprinting, and a bestiary, but it’s also kind of sad that the bonus content featured in some of the other remasters isn’t around. Still, it’s a wonderful return to some more simplistic games that laid the foundation for one of the most important RPG series of all time.

While these first three titles are important, the next three are far more so. Final Fantasy 6 is often regarded as the best title in the entire franchise. 4 is my personal favorite, and 5 is actually quite brilliant as you see the job systems come into their full potential. The promise for these already highly-regarded titles with the remaster treatment is incredible, and I can’t wait to head to the moon and beyond again.

Obviously, one of the major concerns right now is that there has been no console announcement for these remasters. It seems a little strange that these new games would be limited to mobile and PC, so I’m hoping that we’ll hear about a bundled package for consoles after all the titles have been completed and released.

Final Fantasy still rocks, so many years later. Grab a fighter, a thief, a white mage, and a black mage and go explore the world. Or ya know, 4 black mages. Whatever you feel like!

Random: Someone Worked On Outer Worlds AND Outer Wilds At The Same Time, Somehow