This week on Dezeen, The New Library at Magdalene College designed by Niall McLaughlin Architects was revealed as the winner of the 2022 Stirling Prize.

Described by the jury as “solid and confident”, the brick and timber library at the University of Cambridge became the 26th building to win the prestigious Stirling Prize.

It was fourth time lucky for Niall McLaughlin Architects after being shortlisted three times previously for the award. Following the announcement, we rounded up 10 of the studio’s key projects.

In other architecture news, we featured a series of before and after photos of Battersea Power Station, which reopened this week 40 years after it was decommissioned.

The montages show the redevelopment of the building, which now contains shops, office space and apartments, alongside images of it in use as a power station and as a ruin.

In design news, we spoke to production designer Kate Byron about the key modernist architecture and vintage “treasures” that she used to create the set of psychological thriller Don’t Worry Darling.

“We wanted to build a playful and debaucherous take on the 1950s, when there was this illustrious progressive, mid-century modern movement happening,” Byron told Dezeen.

Following a spray-on dress at Paris Fashion Week gaining worldwide attention, we rounded up 10 other experimental dresses with unexpected forms and materials.

We also looked at other Paris Fashion Week shows including a runway made from mud for Balenciaga and a series of cardboard grottos created for Dior.

This week also saw Ukraine’s postal service Ukrposhta issue a stamp that features inside jokes and Titanic movie references, marking an explosion on the bridge connecting Crimea and Russia.

In retaliation for the bridge explosions, Russia launched a series of missile attacks on Ukrainian cities, which killed 19 people and damaged the office of architecture studio Bogdanova Bureau in Kyiv.

Popular projects this week included a second-hand bookshop in Shanghai designed to mimic greengrocer, a series of glazed volumes added to a Victorian townhouse in south London and remote hiking shelters in Australia. 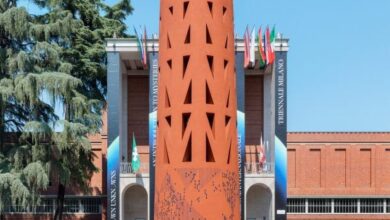 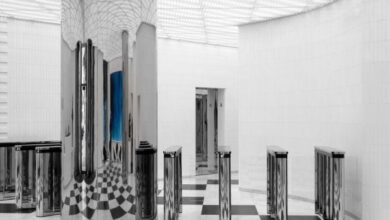 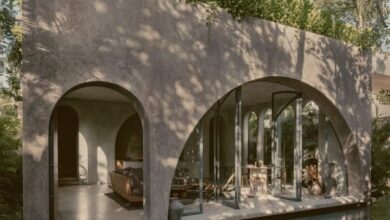