Architecture studio AGD has created a hillside home in California for two industrial designers that incorporates fireproofing strategies such as fibre-cement siding and a metal structural system.

The 2,330-square-foot (216-square-metre) home consists of a main residence and a separate garage and studio building.

The Waterfall Residence is located on a hillside property studded with mature oak trees. It lies just south of Carmel Valley, a scenic area in Monterey County known for its farms and vineyards.

The owners are two industrial designers — Rick Lewis and Linda Menser-Lewis, founders of seven02design — who formerly lived in Palo Alto.

The project came with several challenges. The site was difficult due to its slope, which made conventional construction unfeasible, and the area is threatened by wildfire.

“The Carmel Valley area is prone to wildfire, and the design of the home was intentional to maximize the fire resistance of the home,” said AGD, or Andrew Goodwin Designs, which is based in the coastal city of San Luis Obispo.

To address the slope and to minimize disturbance to the oak trees, the team lifted part of the house above the ground using a prefabricated system from Blue Sky Building Systems.

To boost the home’s chance of enduring a wildfire, the team used steel for the structural frame and exterior decking. Vegetation around the home that could easily catch fire was cleared away.

Shed roofs are covered with standing-seam metal, and facades are clad with James Hardie fibre-cement siding.

The project’s name, Waterfall Residence, stems from an angled wall in the rear that funnels rainwater to a pair of 2,000-gallon tanks.

“This rear wall captures rainwater runoff from the roof and directs it to storage tanks under the structure of the home,” the team said. “These tanks support fire suppression and landscape irrigation needs.”

Ample glazing, including clerestories, usher in natural light and provide a connection to the landscape.

“The house was designed to savor the beauty of the region while blending indoor and outdoor living,” the team said.

The main dwelling, which is 1,430 square feet (133 square metres), contains two bedrooms, two bathrooms and an open-concept space for lounging, dining and cooking.

A breezeway connects to the 900-square-foot (84-square-foot) companion building, which holds an office/studio and two-car garage.

Interior finishes include white walls, concrete flooring and wooden cabinetry. Much of the decor and appliances came from the owner’s collection of mid-century and contemporary pieces. 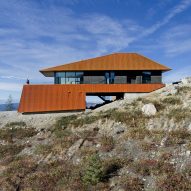 The residence has a number of sustainable features and was designed with off-grid living in mind.

In terms of energy, most of the home’s electricity needs are met by a 6.5-kWh solar array. While the house has several ductless mini splits, heating and cooling are largely provided through passive measures.

During the winter months, a concrete floor captures the sun’s heat during the day, helping warm the interior. In the summer, a raised floor slab enables cool air to be caught under the home during the night.

“This then gently comes through the floor insulation and structural steel to radiate cool temperatures,” the team said.

The team also used renewable and recycled materials. For instance, the columns and beams have a high percentage of recycled steel content.

Other projects in the Carmel Valley region include a spacious residence by Sagan Piechota Architecture that blends with the natural terrain and a house by Feldman Architecture that consists of three pavilions topped with V-shaped roofs.

The photography is by David LaLush.