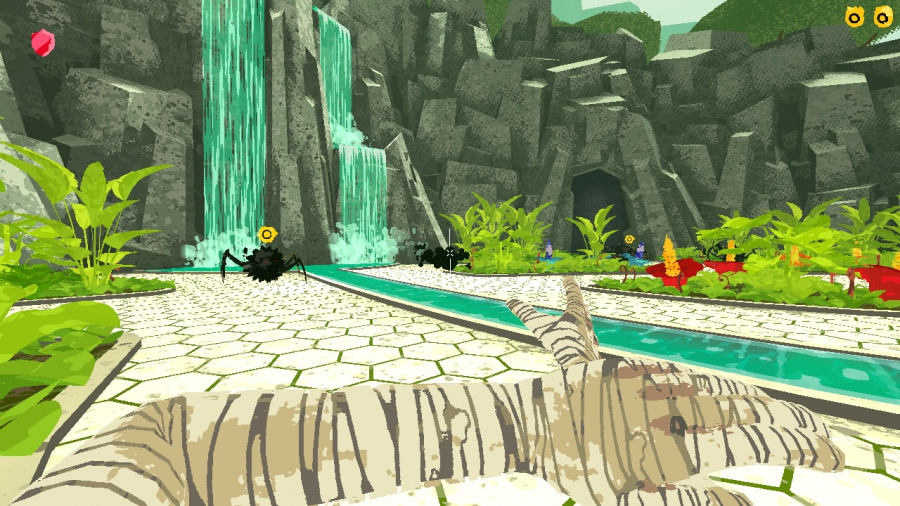 Boomerangs are cool, right? Over the last few decades, we’ve seen a number of bonkers-looking video game weapons such as Cloud Strife’s Buster Sword, Samus’ hand cannon, and even Mario’s very own F.L.U.D.D device. But when it comes to real-life weapons, nothing quite screams cool like a deadly, razor sharp boomerang. It’s a good job, then, that Boomerang X centres its entire gameplay around that rather unique weapon.

Developed by DANG! and published by Devolver Digital, Boomerang X takes place across a multitude of arenas with impressive verticality. You face off against wave after wave of various enemies with just a boomerang at your disposal. The game spends a bit of time introducing you to the basic controls before gradually adding in extra abilities; over the course of the initial group of arenas, you’re taught to simply throw your boomerang and call it back; nice and easy.

As you get a bit further, you gain the ability to slow down time as you aim, along with an ability to launch yourself towards your boomerang as it glides through the air. This means that as you get used to controls a bit more, you can utilise both of these abilities to keep your momentum going to the point where you don’t even have to land back on the ground. You can effectively fly through the air, using your boomerang as both a weapon and a makeshift teleport. 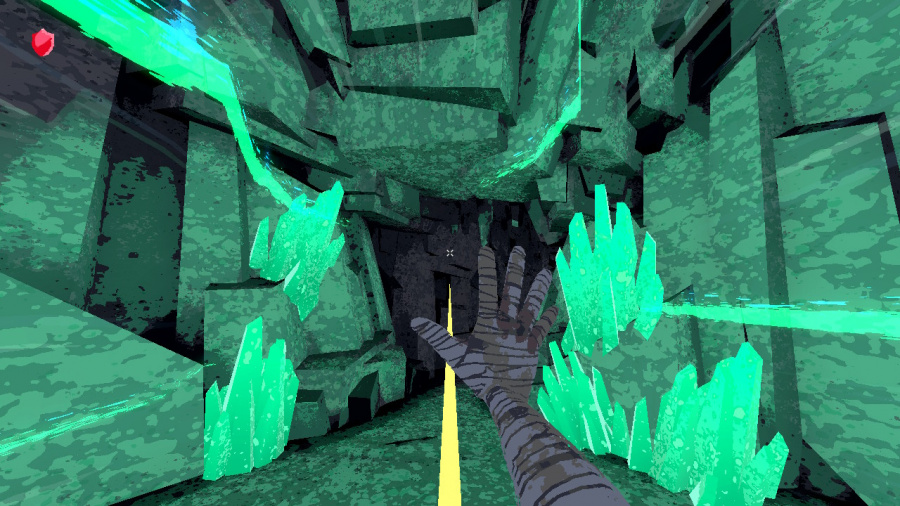 You’re encouraged to effectively string together attacks and wipe out the enemy waves in the most graceful, effortless way possible. If you manage to take out two enemies in one go, you gain an ability to blast out a bevy of boomerangs in one go, kind of like a short-range shotgun. Take out multiple enemies with this, and you can fire out a precise needle shot that tears through multiple enemies, provided they’re lined up in a row. Our favourite ability lets you slam into the ground with force after killing three enemies in the air, wiping out several ground-based opponents in one go.

The good news is that even though each arena may have dozens of enemies to contend with, the game only requires you to dispatch a certain number of them during each wave. These particular foes emit a yellow glow for easy identification, so you can either avoid all of the other creatures entirely if you wish, or kill off a few of them so you gain access to the special abilities.

The enemies themselves are pleasantly varied throughout: starting with the first few arenas, you’ll find simple spiders that skitter across the ground towards you. Further into the game, you’ll come across flying bugs, teleporting magicians, and gigantic giraffe-like creatures. Some of the larger creatures display a red spot that acts as their weak spot, meaning you’ll need to carefully position yourself and line up your spot perfectly in order to defeat them. Others may even be protected by a shield generated by smaller enemies, meaning you’ll have to take them out first in order to deactivate the shield. 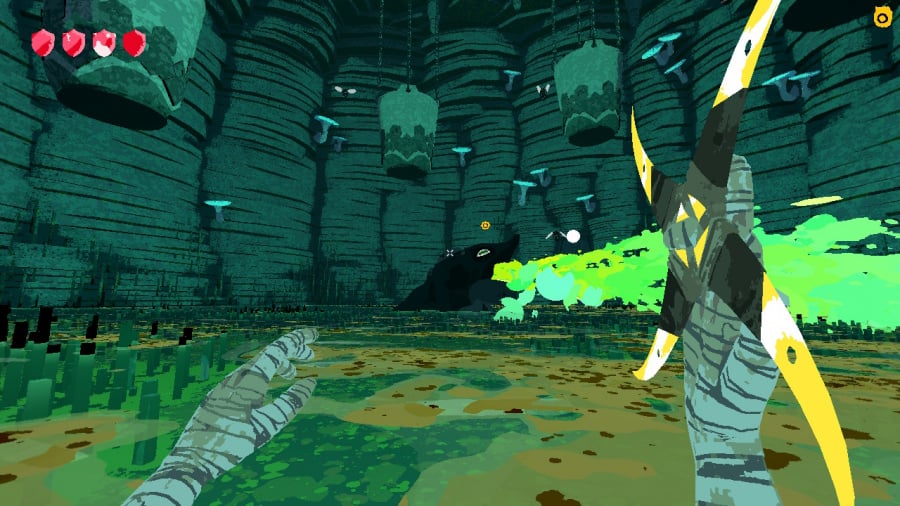 All of the action takes place within a selection of fantastic looking arenas, each one bigger and more elaborate than the last. They start off relatively simple, but as you progress, verticality becomes their main draw, with platforms at various heights and enemies that might start off at ground level, but later shoot up to the ceiling. It’s all designed to encourage momentum, and as you gain confidence in your abilities, you’ll be zipping around the arenas faster than a blue hedgehog.

One drawback to the combat itself is that it just isn’t particularly challenging. If you’re quick enough, you can navigate around enemies with relative ease and not worry about being hit or accidentally crashing into a hazard. The game naturally gets a bit more difficult as you progress, but after each arena you’re gifted with an additional shield slot, effectively giving you more health to help you out for the next stage. With six or seven waves of enemies per arena, we’d be much happier with fewer waves but more complex combinations of enemies to deal with.

The overall length of the game came as a disappointment, too. At just 2-3 hours on your first playthrough, it’s definitely on the short side. The good news, however, is that it’s got the kind of arcade action gameplay that simply begs to be played through more than once as you attempt to speed run through the stages as quickly as possible. 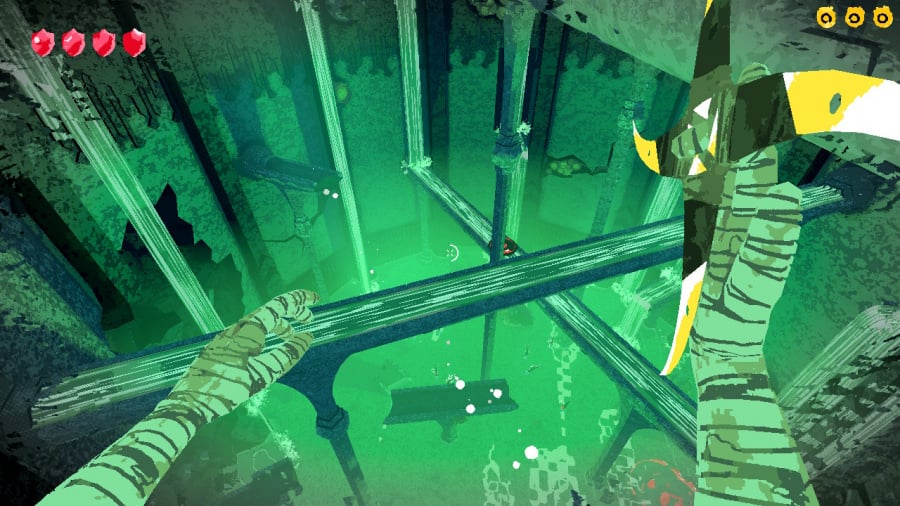 We have to make special mention to the game’s excellent accessibility options. We mentioned earlier that required enemies emit a yellow glow, but actually, this colour can be completely customised to your liking, alongside the colour of your shield, and the enemies’ weak spots. You can also toggle high contrast mode, heighten the visibility of enemies, and more. Games like Boomerang X really do lead the charge when it comes to visual-related accessibility, and DANG! should be commended for it.

Boomerang X features instantly gratifying gameplay that will get its hooks into you immediately. Its arena-based combat encourages you to keep moving and flying through the air in order to avoid death, with your boomerang acting as a kind of portable teleport or hook shot. The overall difficulty is a bit tame for the most part, which incidentally means the game is a bit on the short side, but there’s plenty of potential for repeat playthroughs and speed runs thanks to the fun, addictive gameplay. If you’re a fan of frantic, fast-paced first-person action, then this one will be right up your alley.

Tribes of Midgard Preview – Chilling In The Endless Winter

Black Baltimore Teen Found Dead Inside a Hole In a Wall Was Model Student, Played Violin