Earlier this week, I was able to go hands on with the upcoming Tribes of Midgard, with Creative Director and Norsfell CEO, Julian Maroda. He and his team are aiming to mold a new genre of more approachable and cooperative kind of survival game where people don’t have to worry about having their back stabbed by another player. Cooperative survival is a refreshing concept for me, especially after the past year where virtual get-togethers with friends to play Among Us or Rust were wrought with treachery and trolling.

My time with Tribes of Midgard spanned the first two hours of its Saga mode. Sagas are designed to last a handful of hours, making it a manageable experience for friends to get together for an evening and make some progress on their seasonal reward track. In this mode, up to ten players fight to survive during Ragnorok as Eiherjar against massive giants known as Jötnar and hordes of Helthings are bent on destroying the Seed of Yggdrasil which lies in your village. The idea is for players to hop in, last as long as you’re able, hopefully slay a giant or three, and leave with some persistent rewards to enhance your future runs. 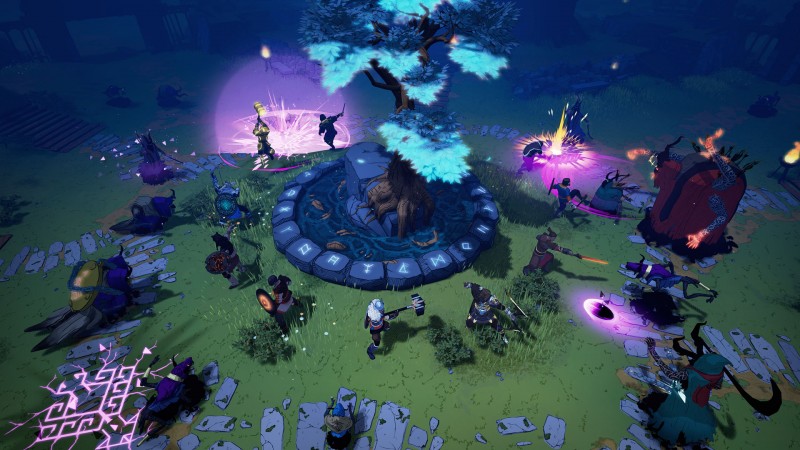 When we first began our journey in Tribes of Midgard, our characters spawned mostly naked in the middle of the forest where scavenging for twigs and stones was necessary to create simple tools; a familiar loop for survivalists. Luckily, you never start far from the village, your main hub in the world where townsfolk can craft new items and equipment from the spoils you find while adventuring. Each day you venture further out to collect minerals, wood, and other materials to build new weapons, armor, and fortifications for the settlement. At night, however, you’re drawn back to protect the settlement from the demonic Helthings. As the days go on, nights get longer and longer as the endless winter and darkness approaches.

Out in the world we fought the likes of goblin encampments and savage animals, but the lumbering threat slowly making its way across the map was our greatest challenge: the mighty Jötnar. When one of these enormous giants appear, an icon appears on your minimap reminding you of its looming presence. We elected scouts to go out and find out what kind of threat we were facing, and were greeted with Jarnsaxa, a Jötnar who controls orbs of electricity and transforms into an imposing air elemental. These fights will put your skills to the test, and if you’re playing with a group, you’ll need as many swords, bows, and hammers you can get to take it down before it reaches the village.

Einherjar have eight classes to choose from in each run, which you can unlock by achieving certain feats throughout the Saga Mode. For the purpose of this demo, we were only given access to the Warrior and Ranger classes, of which I chose the latter to level up. The Ranger class specializes in using a bow and arrow to dispatch of enemies, opening a path to perks that decrease weapon degradation, increase moving speed, and allow for arrows to pierce through multiple enemies. Shooting a bow allowed me to safely launch volleys of arrows at my enemies, but because I was attacking at such a fast rate, my bows would break very quickly, making the reduced degradation skills a must-have. 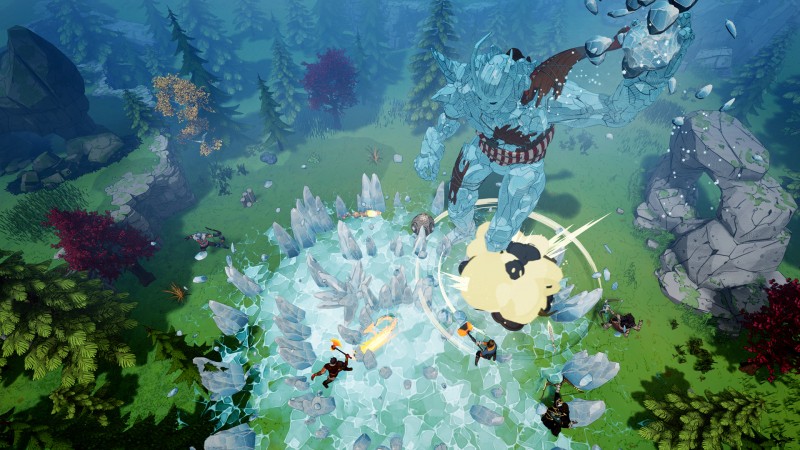 Runes are items you pick up to give modifications to your character and are a natural companion to classes. I was lucky on this run because after I picked my class, I started coming across Runes which increased my damage when attacking from afar. While I found all my runes out in the world, the golden horns you receive from defeating Jötnar allow you to buy some when beginning a Saga to give your Einherjar a little head start. I also came across a curious golden egg rune, which didn’t do anything at the time, but I’m sure there’s a small mystery waiting to be solved with it.

In my short time with Tribes of Midgard, I trekked through some of the procedurally generated world which sports a handful of biomes. One moment I was strolling from a sandy beach into a forest, and another I’d be in a scorching desert, an area where having temperature-appropriate gear matters. While Tribes is built to be more accessible, it is still all about survival against the harsh environment and being able to adapt to nature’s unforgiving elements, especially while having to deal with a giant in a more dangerous climate.

Having the environment change at such a rapid speed doesn’t do much for a sense of place, but does make me feel I need to be prepared for anything. Slowly, these landscapes start to become covered in snow as the world spirals into the endless winter, giving a neat indicator that your journey is steadily getting harder. Tribes of Midgard has a hand-drawn look which suits its mythical world well and allows the changes between biomes to have more impact than something more realistic. While this was a pre-release build, the game ran with out any hitches I could distinguish. Sometimes a character would get stuck on a piece of the environment, but a simple teleportation back to town solved it quickly.

Tribes of Midgard is designed with additional season updates in mind. Over time, free updates will come to the game, adding new features, items, enemies and other threats. The first season titled “The Wolf Saga” has its own set of rewards ranging from cosmetics and runes to starter kits which allow you to skip the initial scramble for tools. I asked Julian what to expect from future seasons, but he had nothing to share at this time beyond there being new themes for each season and additional Saga quests. Those who miss a season won’t have to worry because all seasons will still be available, rewards and all, as new ones arrive.

As someone who’s rather weary of survival games at this point, I enjoyed my short time with this co-op “surthrival” adventure, as Norsfell likes to call it. There’s a lot to Tribes of Midgard I wasn’t able to see, such as the boss of the Saga, or their other big mode called survival. Luckily, the launch of season one is just around the corner. Tribes of Midgard will be coming to PlayStation 5, PlayStation 4, and PC on July 27.