Italian studio Mario Cucinella Architects has designed a cultural centre in Tuscany within traditional houses, which connect to a new angular terrace that protrudes from the hillside.

Located in the medieval hillside town of Peccioli, situated between Pisa and Florence, Palazzo Senza Tempo was built as a response to the local government’s push for new cultural programmes and built heritage.

The centre occupies a number of renovated and repurposed 14th-century townhouses above a steep slope, as well as a new two-storey structure with a cantilevered plaza that protrudes from the side of the hill.

“The redevelopment works as a bridge between the historical memory, which characterized these buildings, and its future, a civic and cultural centre for the town of Peccioli, the entire Valdera, and the thousands of tourists visiting each year this extraordinary open-air museum,” Mario Cucinella Architects told Dezeen.

The facades of the townhouses maintain their traditional aesthetic, but have been updated with protruding full-height windows that visually tie to the contemporary angular structure below.

“The relationship between nature and architecture is the main character here: the bow windows with their volumes are projecting from the external facade, collecting the light and projecting the gaze towards the outside by incorporating it,” said the studio.

The cultural centre is accessed via a passageway between two former houses, which leads visitors to an internal courtyard that Mario Cucinella Architects has covered with a large glass roof.

Much like their exterior, the houses have been renovated inside to preserve their aged characteristics. Stone, brick and render cover the walls, floors and ceilings – all treated and finished in keeping with a ruined and raw appearance that hints at the buildings’ history. 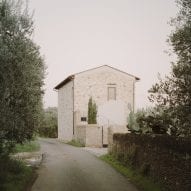 Visitors are led from the restored townhouses out to the centre’s large terrace, which juts out to provide undisturbed views across the vineyards and olive groves situated below.

“The terrace is like a bridge that flows towards the landscape and let the town establish a relation with the surrounding countryside,” said the studio. “The free public street access reinforces the concept by transforming the terrace into a central public square.”

Directly beneath the terrace is a two-storey structure enveloped in floor-to-ceiling glass across its three elevations. The interior of this new addition was lined in wood, framing the expansive Tuscan views.

The studio used materials that it hoped would complement the historic town but also provide a contemporary injection to the site.

“Peccioli is a real laboratory”, said Mario Cucinella. “In the project we wanted to carry on the idea that historical centres can give themselves a new life with contemporary elements, not living only in the past.”

“Even the new terrace is like a bridge connecting a landscape that looks like a painting from the 1500s and the modern world,” he continued.

“With the opening of Palazzo Senza Tempo, Peccioli launches an important theme, that of communities and their public places. It shows the courage to do something ambitious, while respecting history, and, to keep the citizens of an old Tuscan hill town young people”.

The photography is by Duccio Malagamba.