Ever looked at Jill Valentine, Leon Kenney, or Chris Redfield and thought to yourself: “Self, I want to smell like those fine specimens”?  If the answer is yes, then boy, do we have the perfume for you. Capcom is now selling officially licensed Resident Evil perfume, and don’t worry: it doesn’t smell like blood and gore like the gimmick candle the company sold a few years ago.

For now, the perfumes are limited to just the three characters and to the Capcom Japan store. The company hasn’t confirmed if the eau du zombie killer line will be making its way to the west, but there is hope for those that don’t have a pal in Japan for the hookup. In the past, Japan-exclusive items did eventually make their way to a global release. That, and eventually the line will make its way to Amazon Japan, which usually will ship internationally. 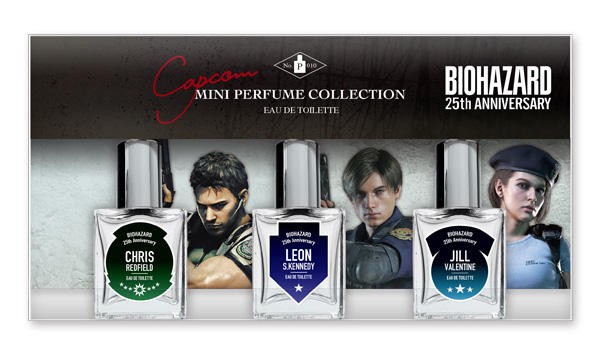 The downside is that we don’t actually know how the three scents smell. The description states that the perfumes were inspired by the characters, but doesn’t reveal how. What are the notes? Floral, musky, fruity? Do they smell like murder and rampage, or do they smell like the frustration we felt in Village when we were yelling at Chris, “THIS COULD HAVE BEEN AN EMAIL.” No matter, they’re nifty collector’s items at worst.

Capcom is no stranger to making scents based on its popular franchsies, including an admittedly awesome Devil May Cry line, Ace Attorney, Monster Hunter, and more! To learn more about the Resident Evil additions and what Capcom has in store, you can check out the official shop’s listing right here.

Holding out for a global release? We get it! But while you’re here, feel free to mosey on over to our most recent Resident Evil hub with Village to see all of the latest and greatest regarding the latest entry in the Capcom franchise.