Dead Space 2 is an annoying game. Not a bad game by any means, but one that tests my patience and exhausts me for hours on end. It’s because of a backend technical issue, but I feel lucky that we currently have our comments turned off. I dread what some of you would say down there after that first sentence.

For most of its playtime, Dead Space 2 is never interested in scaring the player; it wants to terrorize them. And admittedly, in the game’s opening sections, this is incredibly effective. Protagonist Issac Clarke awakes to find himself strapped in a mental hospital – ostensibly because of what he’s seen and experienced in the first game. However, a man is there, helping set him free. A woman calls you, explaining he’s there to help you. You don’t know these people, but if the sounds of destruction outside your room are any indication, there’s no real choice but to trust them.

It’s at just this moment that one of the most viscerally disgusting scenes ever put into a video game takes place. Something small burrows its way into the man’s head, quickly rendering him incapacitated. It’s unclear what on God’s green Earth that little fella is doing in there, but safe assumptions lead you to believe it’s not great for our new host here. And just then, this poor sap’s face tears wide apart, exposing tissue, bone, and muscle as he pulls you forward and screams directly at you. It is, truly, one of the worst things I have ever seen. 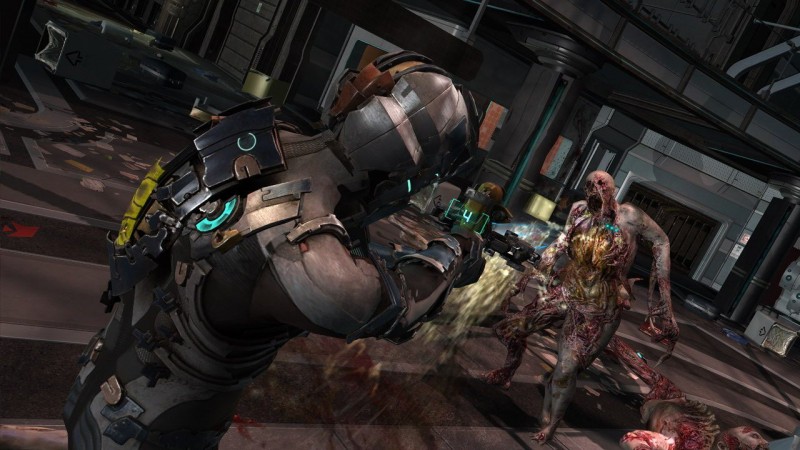 Circumstances continue to go downhill for Isaac. Freed from his room, he runs through the hospital, and by extension, the space base housing him, trying to escape the shrieking monsters now pouring out of the walls and every other which way. He’s stuck in a straightjacket, so even if he had a weapon, he doesn’t have the hands to use it. All there is to do is run and hope you come across someone – literally anyone – that can help you.

The first person you come across is a doctor. He’s clearly losing it, aware of the horrors making their way into this once quiet compound. He has a knife, which he threatens you with. It seems like this might be the end for Isaac – which would be an anticlimatic way to go after the other guy got his face torn open, but that’s neither here nor there. Instead, the man cuts you free. And then, as if things weren’t comically bad enough, he slits his own throat and you watch him bleed out. It’s a disturbing and effective moment, punctuating the helplessness of everything going on around you.

With your hands free, the game more-or-less starts properly. You find a weapon, your suit of armor, acquire your powers, and get to work fighting back against the monsters seemingly in every room, nook, and cranny of this building.

The opening of Dead Space 2 is fantastic – if only due to how sheerly disorienting it all is. Everything described above, that’s like, the first 20 minutes of the game. Before you have a second to learn the controls, Dead Space 2’s assaulted you with more fear and gratuitous violence than your brain knows what to do with. It’s an incredible way to immediately shred the player’s nerves and establish as-soon-as-possible the desperation of the situation.

And then the game just continues operating at this tempo. Where once a Necromorph bursting out of a wall, shrieking in the vile way they do, was scary and unexpected; after three to four hours of this, walking into a room no longer comes with a sense of dread. In Dead Space 2, something like a jump scare is never a matter of if it’s going to happen. It’s a matter of when. The game doesn’t build tension in between these moments; it cuts right to the punchline. It becomes exhausting and monotonous. Dead Space 2 doesn’t know how to shut up, to get out of its own way, and to build on its unsettling atmosphere in ways that will make its scares earned and effective. Instead, it’s just loud, brash, and obnoxious after a while.

That is until the Ishimura level. 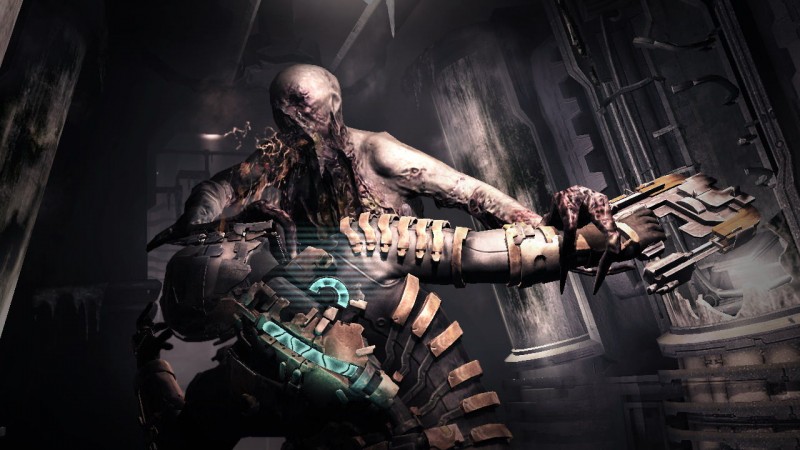 If you’ve played the original Dead Space, then the location should be intimately familiar. It’s the setting from the first game, where Isaac first encounters all the horrors that now define his digital life. In video game language, going to the location of a previous game is a big deal – for some reason. It’s a way for developers to say to players, “Hey, remember that thing we did a couple of years ago? Here it is! Again!” And by God, there it is! Again! I remember those assets and textures. Boy, how neat! I’m being reductive, but it is kind of silly when a game only one entry later treats this as some big revelation. Dead Space and its sequel were released just over two years apart; it’s not like the Ishimura was ancient history at this point.

The Ishimura does little for the game mechanically. You don’t do anything on the ship you couldn’t do in any other level. Narratively, it’s mildly interesting putting Issac – clearly suffering from PTSD due to what happened on the Ishimura in the first game – back at the scene of the crime. It doesn’t do too much with the setting in the grand scheme of the overall story, but it’s novel enough for what it is – if a bit contrived.

All of this is to explain my headspace going into the level. After hours of being exhausted with the game’s approach to horror, being asked to comply with some half-hearted attempt at fan service, as I saw it, was a bit much for me. But that all changed when I started walking around.

The most remarkable thing about the Ishimura is how quiet it is when compared to the rest of the game; for what feels like an eternity, you walk through the ship’s abandoned halls and rooms, all dark as night, expecting something to jump out at you, to scare you. But it never does. At least not for a while. You’re alone for the first time in the game, kept company only by the sounds of your footsteps and the fear of what goes bump in the night. In a game that’s been trying as hard as it possibly can to scare the player and failing most of the time to be anything other than exhausting, this was the moment fear finally set in – six hours into the game. Real fear. Dread. Anxiety.

There’s a very specific feeling that intense anxiety produces. It feels hot, like an explosion of heat in your chest. As I walked through the Ishimura, I could feel that heat creeping through my body. The longer the silence went on, the more I was forced to wait for whatever hell was at the end of this journey, the more I experienced actual dread, real fear of what was to come. Simply taking steps forward felt Sisyphean. It took me two days to finish the admittedly short level because it scared the living s— out of me. It was amazing. 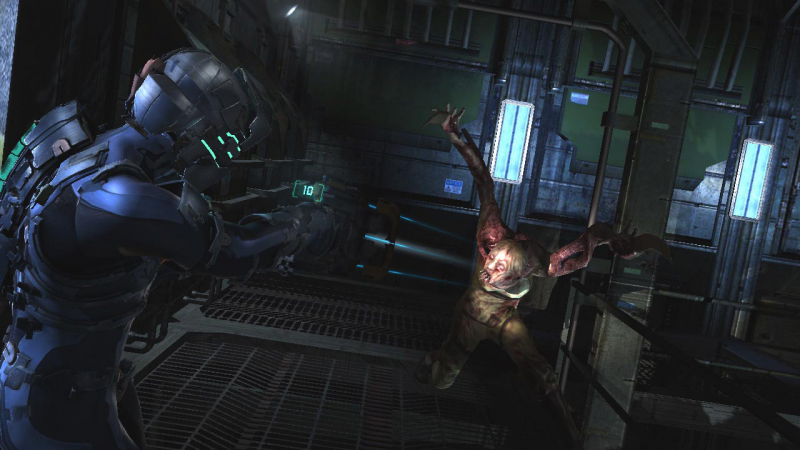 There’s a common saying around horror movies that the scariest thing you can show is nothing at all; what’s in the viewer’s mind is far worse than anything you can put on screen. I don’t buy this philosophy 100 percent of the time*, but I think it’s true in a lot of cases. It’s why a movie like The Blair Witch Project is effective. You never actually see the witch in the film, but I bet you imagined her, and it was terrifying. The movie operates wholeheartedly on the assumption you’ll fill in the gaps yourself about what the witch looks like and then relies on solid on-screen tension building to do the rest.

This is harder to do than just making a spooky monster and making them pop out at unexpected times, giving the audience a quick shock. And it’s why most – but not all – mainstream horror movies tend to rely on cheap scares. Sinister, Insidious, The Conjuring series, the Halloween reboot series, etc., are all great at making you jump. But none of them have the time, patience, or restraint in building an atmosphere that’s actually scary the way films like, say, Possession, The Wailing, or Lake Mungo do. None of them are willing to take the time. Mainly because money talks and these movies make a lot more money than thoughtful horror films; they’re all terrible movies regardless, but you can’t argue with the color of a dollar.

For most of its runtime, Dead Space 2 operates like the former films of the prior paragraph. But for one shining level, it moves to the latter. I wish that were the game I played because when finally, after what must have been 10 or 20 minutes, the monsters did come for me on the Ishimura, it felt earned. It made these monstrosities, in all their grotesque forms, the climax of a brutal nightmare.

The Ishimura section made me love Dead Space 2. It’s an hour-long level in a game I’ve otherwise found annoying and exhausting, but I mean it, I love Dead Space 2. It all comes down to this one level. But that’s the power of good horror. I think horror is one of the most important forms of art we have for various reasons, but one of the main ones is it’s a rare form of media that appeals to our basic human instincts**; fear and self-preservation are hardcoded into our DNA. When Dead Space 2 finally shut up, when it eventually committed to being scary, the thing it ostensibly set out to do in the first place, it worked incredibly well. It terrified me beyond what I was ready for. I love it for that. I just wish the rest of the game committed in the same way.

*Where I disagree here is that humans or monsters based in humanity will always be scarier than the typical monster movie, and therefore work when shown. Regan MacNeil from The Exorcist, Asami from Audition, Mamiya in Cure, and so forth are warped versions of an average human, meaning the brain can easily recognize them and recognize how they’re twisted. They become terrifying because we easily understand them, and that’s far more effective than hiding them in the shadows.