Denniston Architects has converted New York City‘s Crown Building in the heart of bustling Midtown into a space for the Aman Resorts luxury hotel group.

Aman New York hotel opened in August 2022 in a beaux-arts building at 57th Street and Fifth Avenue completed in 1921 by Warren & Wetmore – the architecture studio behind Grand Central Station.

Jean-Michel Gathy and his studio Denniston Architects, which is frequently tapped for Aman locations, restored and converted the 25-storey tower to create 82 suites and 22 residences.

To create a feeling of quiet and relaxation in the middle of New York City, elements like glass soundproofing were combined with a muted, minimalist colour and material palette throughout the building.

Gold details were also added throughout as a nod to its ornamental spire.

Japanese influences are found in elements including textured stone floors laid in a pattern reminiscent of woven rattan baskets.

Pairs of pivoting louvre doors with backlit rice-paper panels can be angled by guests to open up or contain the spaces within their rooms.

These doors envelop the bathrooms, which are fitted with free-standing oval bathtubs, marble rain showers and twin vanities.

All of the guest rooms and residences also have a working fireplace to help occupants feel cosy.

Hotel guest amenities include a 20-metre swimming pool on the 10th floor, a fitness centre, and a 650-square-metre outdoor terrace that can be covered with a retractable glass roof.

An atrium on level 14 hosts a series of giant paper and bamboo sculptures by Peter Gentenaar that float between four stone columns.

Of the two restaurants within the building, Italian-influenced Arva is arranged around a central open kitchen and surrounded by floor-to-ceiling wine cabinets.

The Aman Spa is open to the public and is spread over three storeys and 2,300 square metres.

“Active spaces including the pool and fitness centre feature light timbers and grey tones, while passive spaces where treatments are enjoyed at the very core of the building are more nurturing, with curves and warmer hues,” said the Aman Resorts team. 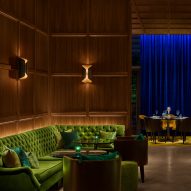 All are known for offering privacy and seclusion, and each is designed as a unique experience that pays homage to its location.

Others in the portfolio include Amanyangyun near Shanghai, which was created by moving an area of threatened historic houses and forest 800 kilometres, and Aman Kyoto, named Hotel of the Year at the AHEAD Asia 2021 awards.

The Aman New York joins myriad hotels in Midtown Manhattan, with high-end options including the Edition Times Square, and more affordable alternatives like the AC Hotel and Moxy Times Square.