Diez + Muller Arquitectos has extended the corporate offices of an industrial company in Ecuador with a sinuous concrete extension.

The new office building was designed for Novopan, the largest particle-board manufacturer in Ecuador. Initially, the client commissioned local studio Diez + Muller Arquitectos for a five-storey building on a parking lot across a street from the factory in Quito.

“Upon arriving at the site, we identified an opportunity by finding an elongated and irregularly shaped slope next to the existing factory, which would allow us to develop the same project in only two floors,” Diez + Muller Arquitectos explained.

The program follows the outline of a nearby highway, wrapping around the road and factor so that the industrial buildings are partially hidden from view.

“We managed to make the new offices the face of the company in the city, reducing the strong presence of industrial sheds and generating a new, more humane and friendly scale,” said the architects.

In the irregular space left between the existing and new buildings, the architects included a courtyard that forms a connection between the factory and office spaces.

“The project takes advantage of the ‘residual’ spaces between the office building and the factory to insert support and service areas,” explained the studio, which is led by Gonzalo Diez and Felipe Muller.

At the centre of the building, a double-height atrium lit by playful, circular skylights serves as a gathering point for the company’s employees.

It features tiered seating, large indoor trees and an area for workers to socialise. 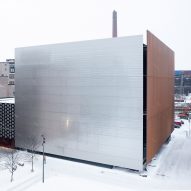 “A central atrium integrates the two floors and is where there is the greatest physical and visual communication in the building,” Diez + Muller explained.

“[It was] conceived not only as the heart of the project, but also where the organization’s social activities take place, and above all motivating users to connect, to meet and share,” the studio added.

The offices themselves are organised along the length of the building, which the studio said allows for easier collaboration between the company’s various departments.

Because of the building’s narrow floor plate, nearly every office receives natural light and views of the city in the distance. The interiors are lined with wood panels that were manufactured by Novopan.

The panels cover the walls, floors, and ceilings, bringing some contrast to the exposed structural concrete elements.

“Inside, the concrete skeleton is visible, defining the space without make-up or additions and being complemented only with details and furniture manufactured in the plant itself,” said Diez + Muller Arquitectos.

The building’s facade was completed with a system of vertical louvres, which help protect the interiors from the harsher afternoon sun. This is also helped by the concrete floor slabs, which project out beyond the windows and shade the facade.

Other industrial buildings include a new factory for the lighting company RBW, which occupies the former IBM Campus in Kingston, New York, and a former cable factory in Helsinki that has been converted to dance studios and performance spaces by JKMM and ILO architects.

The photography is by Jag Studio.