Swedish cosmetics brand Forgo has conducted a lifecycle assessment of its mix-it-yourself soap in a bid to eliminate carbon emissions from its supply chain.

By driving down the emissions associated with producing its refillable cosmetics, the company hopes to reach net-zero by 2026, co-founder Allon Libermann told Dezeen

“We will be net-zero with offsets as a company,” he said. “Maybe not by 2023 but definitely within the next five years. So that includes Scope 1, 2 and 3 [emissions].”

To become net-zero, a company needs to reduce its emissions across three categories, as set out by the Greenhouse Gas Protocol.

According to Libermann, Forgo will begin by focusing on its Scope 3 emissions as these will likely be the most substantial.

“First and foremost, we want to reduce our own supply chain emissions as low as possible,” he said.

Forgo is one of several design companies taking a lead in efforts to become net-zero businesses, meaning they eliminate all emissions generated both by their own activities and those of their value chain.

To become net-zero, companies must do as much as they can to remove greenhouse gas emissions from their entire value chain, including materials provided by suppliers and the lifetime use of their products. Any remaining emissions must be offset using schemes that remove CO2 from the atmosphere.

“I’ve seen a lot of brands going straight to offsetting and I find that when you do that you kind of skip over the fact that you’re an emitter,” said Libermann.

The global economy needs to become net-zero by 2050 at the latest to achieve the aims of the 2015 Paris Agreement and have a chance to cap global warming at 1.5 degrees Celsius above pre-industrial levels.

Forgo, which was launched by Libermann and design studio Form Us With Love at last year’s Stockholm Design Week, produces soap that’s delivered to the user in powdered form.

Customers then mix the powder with tap water inside a reusable glass bottle.

Forgo commissioned New York company Carbon Calories to carry out a lifecycle assessment on its products. This concluded that the refill system has a lower carbon footprint over time than continually buying new single-use plastic containers.

However, upfront emissions are higher. Producing the reusable bottles generates four times more emissions than creating a throwaway plastic one due to the energy needed to heat and melt the glass.

But because single-use containers need to be replaced regularly, this creates a larger, cumulative carbon footprint over time.

Carbon Calories’ analysis found that after five years, Forgo’s refill system would have avoided the need for approximately 55 plastic bottles, with each refill sachet emitting 85 per cent less carbon dioxide equivalent (CO2e) than buying a new bottle of soap.

Buying refillable soap is similar to investing in renewable energy infrastructure such as solar panels, Libermann argued, which involves an initial increase in emissions in the construction phase that is eventually cancelled out by eliminating the need to burn fossil fuels.

“We’ve applied the same principle to our products,” Libermann said. “So the bottle is an upfront investment and over time, as you use it, you dramatically reduce your emissions.”

From here, Forgo will work to drive down the footprint of its products to as close to zero as possible. Then the company will look at offsetting what emissions remain, in line with The Oxford Principles for Net Zero Aligned Carbon Offsetting, by investing in direct air capture (DAC) and soil carbon sequestration.

Off the back of Carbon Calories’ lifecycle analysis, Forgo is lobbying its glass workshop in Portugal to switch to renewable energy and recycled glass. 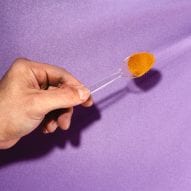 This would eliminate the need to mine limestone and sand and drive down the emissions associated with the production of its bottles.

“Changing the power source is something that the customer doesn’t really see or experience when they buy a product but it’s the easiest ways to reduce emissions,” Libermann said.

“It’s possible to make glass entirely from renewable energy but most factories, like ours, still use mostly natural gas. We’re discussing ways that they can make the switch but we’re one of their smallest clients so we need all the others to be on board and willing to pay the cost.”

An even less carbon-intensive option would be to create solid soap bars that need minimal packaging. But Libermann argues that the possible positive impact of such a product would be smaller due to declining demand.

“Liquid soaps make up 70 plus per cent of the global market,” he said.

A Forgo starter kit, including a reusable glass bottle and three refill sachets, currently retails for £44, making it more comparable to the price of an Aesop product than that of a standard high street brand.

“It’s going to cost more to make things in a better way, so buying soap for £1 to £2 wouldn’t be realistic,” Libermann said.

“Everyone is racing to the bottom in terms of what they charge customers and how little they pay their farms and manufacturers,” he added.

“Making everything super cheap makes it accessible but it also creates an economy where brands make money when you throw something away because you go out and buy another one. That business model doesn’t work with a sustainable future.”

This article is part of Dezeen’s carbon revolution series, which explores how this miracle material could be removed from the atmosphere and put to use on earth. Read all the content at: www.dezeen.com/carbon.

The sky photograph used in the carbon revolution graphic is by Taylor van Riper via Unsplash. 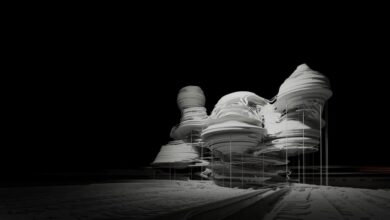 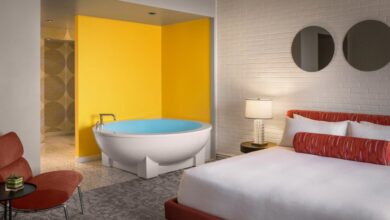 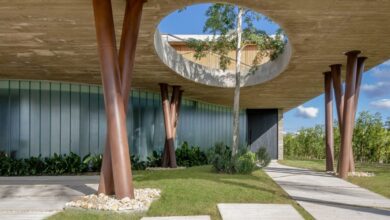 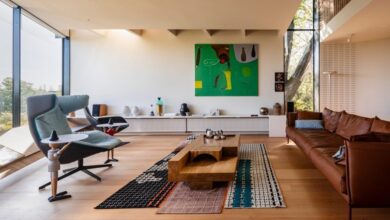