Functional Creative Design founder Sarah A Abdallah has revamped the interiors of members’ club NeueHouse in Manhattan, turning the front of the space into a restaurant that can easily become a stage for events.

The New York-based designer and consultant returned to refresh NeueHouse, having first worked on the project with Rockwell Group in 2014.

A member of the creative co-working space herself, Abdallah used her knowledge of the place and extensive experience in hospitality design to renovate the interior as it approached its 10-year mark.

Conversations about the project began pre-pandemic, and the restrictions enacted as a result ended up guiding portions of the design.

Major changes to the space included converting the front area into a restaurant, which is used for dining, informal meetings and as a workspace during the day.

At night, this spot becomes a stage for speakers or performers, who form part of a robust events program.

“Space planning for this particular area was very key to insuring people felt safe, also I had to be sure we were compliant with NYC regulations that were changing weekly,” Abdallah told Dezeen.

With this need for flexibility in mind, the designers installed lightweight banquettes from Danish brand Menu that can be unclipped and easily moved by staff.

These are accompanied by two-top tables with violet-hued marble surfaces, where members can “grab a tea and laptop and have their own morning ritual”.

The restaurant faces a set of Spanish steps, which form areas for casual work and act as an amphitheatre of seats during events.

These were updated with new metal details, walnut veneer, custom pillows and tables for laptops or drinks.

“We added small round tables by Bernhardt Design at the bottom steps and cluster stools by Suite NY so this could also be an extension of the restaurant as well,” said Abdallah. “Two people could sit together for a drink and small plates.”

To the left is further seating that serves as a cafe during the day and a wine bar at night, including a custom banquette built into the side of the steps.

The circular bar, designed as a freestanding sculptural element, is faced in leather padding and topped with a green marble counter.

Two matching high-top tables in front allow members to gather and circulate as they wish, while a variety of seating options are available beyond. 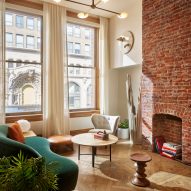 Behind the Spanish steps is a new cafe and retail area, organized around a walnut island.

In the bathrooms, floor-to-ceiling marble was added in the stalls and behind the urinals, and wood panelling also creates an elevated residential-like environment.

“Hand washing became an essential ritual to our health during the pandemic and so we wanted to also elevate the bathrooms to allow members to take more time to look in the mirror, be in gratitude and also take in the design details,” Abdallah said.

The designer previously worked on projects including the Park Hyatt in Washington DC, the Intercontinental Hotels in Cairo and Geneva, and 15 Hudson Yards in NYC before founding Functional Creative Design.

NeueHouse also operates three locations in Los Angeles, including one inside the landmarked Bradbury Building, while a fifth has been announced for Miami.

Dezeen hosted a series of talks with the company in 2022, including a conversation about the metaverse and another focused on Afrofuturism.

The photography is by Ball & Albanese.

World Cup: Fans in Morocco and around world erupt with joy