This family house in Quebec is modelled on the region’s vernacular architecture and was designed to Passive House standards of energy efficiency.

Canadian architecture firm L’Abri and contractor Construction Rocket collaborated closely on the creation of the Saltbox Passive House, the primary residence for a family of four.

Located on the southern flank of Mont Gale in Bromont, in the Eastern Townships, the 3,100-square-foot home is built over three levels into the sloping 2.5-acre site.

Passivhaus, as it’s also known, is a high-performance building standard that originated in Germany three decades ago.

Qualifying buildings are highly energy efficient and sustainable, achieving heating and cooling energy savings of around 80 per cent.

“The basic principles of the standard are simple: a highly insulated and very airtight envelope, superior heat recovery of the mechanical ventilation system and a design which optimises the orientation and sizing of openings to promote passive heating of the building,” said L’Abri.

This residence was designed to reference the region’s historic saltbox-style houses, which originated in 17th-century New England and are still prevalent in this part of Canada.

Situated in a meadow surrounded by protected woodland, the home is laid out in a L-shape and has different roof styles over its perpendicular arms.

“The nature of the site and the local vernacular architecture prompted us to turn to a historical form,” said the studio.

“With a gable roof on the main section and single pitch roof on the lower section, this colonial style takes its name from the lidded containers where salt was once kept above the hearth to keep it dry.”

Nestled into the slope, the house faces south to aid passive solar heating and make the most of views.

Retaining walls made from excavated stone are partially hidden by the landscape, as is a basement garage that only appears on the approach up the gravel driveway. 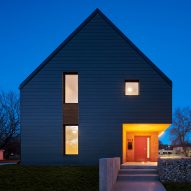 The ground-floor entrance is marked by a panel of burned cedar cladding – a stark contrast to the rest of the white wood-faced exterior.

The lobby leads through to a central double-height room that the architects describe as the heart of the home.

Occupying the southern wing of the L, this space contains the kitchen, living and dining areas, bathed in light from large windows on three sides.

A pantry is tucked behind the kitchen, which is topped by a mezzanine office accessed from the level above, while a media room and guest room join a bathroom and laundry in the other wing.

The pocket of outdoor space formed by the building’s shape is accessed from both wings and covered by a wooden pergola, shading an al fresco dining area and passively regulating the internal temperature.

Upstairs, three bedrooms and two bathrooms are lined up under the gabled steel roof, connected by a corridor on one side.

The architects and contractor worked with a consultant from PHIUS, North America’s largest Passive House Certification, during the design and construction of the house.

Decisions were tested using an energy model, informing the choice of a double-stud structure for above-ground walls and triple-glazed UPVC windows.

“This experience confirmed to us that a building can be both aesthetic, in harmony with its environment and extremely efficient,” said L’Abri.

Although it originated in Germany, Passivhaus has gained traction in North America as a standard for many homes and other types of buildings.

Recently completed examples include a cidery in New York’s Catskills Mountains, a townhouse in Brooklyn, and a residence designed by students in South Dakota.

The world’s tallest Passivhaus building is also planned to be constructed in Vancouver.

The photography is by Raphaël Thibodeau.

In India, growing clamour to criminalise rape within marriage

The Wind That Shakes Us: Why We Need Hard Times