Hearths found in Japanese farmhouses informed the interiors of this restaurant in Houston, designed by Michael Hsu Office of Architecture.

“Inspired by the central hearth of Japanese farmhouses, Uchiko presents a sense of intimacy with a central focal point, which feels both old and new,” said the studio.

“The rough material is manipulated in a refined manner to create an unexpected arrival experience.”

The studio created this latest location for the Uchi brand as a sister concept – Uchiko meaning “child of Uchi” – after designing its space in Miami earlier this year.

Some of the design elements used in the South Florida restaurant were adapted for this counterpart, including a latticed screen around the entryway.

Throughout the restaurant, warm tones of timber and Venetian plaster are found alongside cooler blues as in the banquette upholstery and patterned wallpaper by artist Camille Warmington behind the booths.

The same colour was used by local muralists Alfredo and Vera Montenegro to draw the eye up to double-height portions of the ceiling, which gently curve at the top.

A mezzanine level overlooking the murals includes a private dining space with a bar and sushi bar inhabiting opposite walls.

Reclaimed walnut flooring runs through the two main dining spaces, positioned on either side of the hearth-like entryway.

The room is also punctuated by a large private dining area, as well as a chef’s table featuring a large, blue fringe light fixture.

White oak and cedar furniture, including custom banquettes influenced by the work of Brazilian modernist designer Jose Zanine Caldas, are enhanced with bronze and brass details. 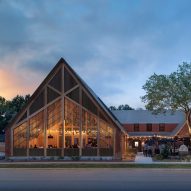 A long sushi bar stretches the back of the space, with a linear light fixture above highlighting the performances of the chefs behind.

Custom-designed, cast concrete light shades by sculptor Brandon Mike feature in the entryway and above the dining tables.

Uchiko Houston also has an outdoor patio and bar that adds to the already lively atmosphere of the Post Oak neighbourhood.

Michael Hsu founded his studio in Austin in 2005 and opened a second office in Houston in 2018.

His team converted a 1940s church into an Asian smokehouse earlier this year and has previously completed projects that range from a Texas Hill Country house to Shake Shack’s headquarters in New York.

Algorithmic stabilization is the key to effective crypto-finance