Boston architecture studio OverUnder has renovated a heritage-listed Victorian home, extending the property to the rear and updating the interiors with a contemporary and minimalist palette.

The property is located in Boston’s South End, a neighbourhood characterised by its Victorian and Italianate architectural influences.

The building’s exterior appearance falls under the protection of the South End Landmark District Commission (SELDC).

The challenge for OverUnder was to conduct a complete renovation of what was previously a three-unit home into a new single-family residence, without compromising the exterior appearance of the building.

“The interior of the house was completely demolished down to the side brick walls, the front façade and the roof,” said the team.

“As the design team had decided to remove all of the interiors and the rear wall, they had a blank slate with which to work.”

As the demolition work progressed, the team discovered that the party walls did not have the anticipated bearing capacity that would be needed for the new layout.

They remedied this issue by creating ring beams – horizontal structural elements bolted to the demising walls at every storey – to support the new floors.

“The new floor joists spanned inside the ring beam which created a much stronger wall and floor making the building structurally sound,” OverUnder said.

The architects laid out the interior’s 3,100 square feet (288 square metres) over five floors, including the basement, creating space for four bedrooms and three-and-a-half bathrooms.

An extension was built at the back of the home, facing Waltham Street, using bricks salvaged from the demolition process.

This volume houses the kitchen and rear deck on the first floor, as well as a home gym, a new entrance and mud room on ground level. 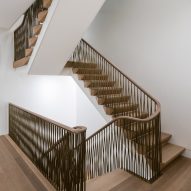 The staircase leading down to a spa in the basement is fully lined in timber.

“We wanted to create a feeling that it was cut from a single block of wood, so the walls, treads and risers are all of Douglas Fir and finished with the same white soap and lye,” said OverUnder.

A blackened steel staircase connects the remaining three levels continuously and is illuminated by a skylight in the roof.

At each landing, OverUnder included glass guardrails rather than steel, which help bring as much light to the interiors as possible.

Other interior finishes include lye-washed Douglas fir, which was used for flooring, built-in cabinets, and accent walls throughout.

“We also removed all extraneous detail such as baseboards, window and door casings and ceiling coves,” said OverUnder. “We used frameless doors and returned the plaster in on the window jambs and created a half-inch shadow gap between the bottom of the walls and the floor.”

Despite the structural challenges and compact footprint, the outcome is a property with generous interiors and a contemporary feeling.

Also in Boston, Merge Architects has completed a housing development clad in corrugated steel that faces the harbor. There have also been plans for a carbon-neutral development using CLT lumber construction by Generate.

The photography is by Bob O’Connor.