The project is located on a leafy, suburban-style lot in East Hampton, Long Island. It was designed for a child-free couple who wanted a home with a strong indoor-outdoor connection and plenty of space for entertaining.

“They wanted to be able to comfortably host a crowded party, and feel like it was full enough with just the two of them,” said local studio Oza Sabbeth Architects.

The property was sandwiched between neighbouring homes and offered little in terms of views.

Rather than design a home that spans the width of the lot and forms a big backyard, the architects decided to create a more linear home that makes the most of the property.

The house consists of several volumes positioned around a series of outdoor spaces, including a pergola-covered central patio and an adjoining swimming pool.

The volumes are topped with asymmetrical, pyramid-shaped roofs and are connected by “alleys” that contribute to a feeling of compression and expansion.

Exterior walls and roofs are wrapped in cedar shingles.

“After running through multiple siding options, they chose shingles, adding an additional layer that runs along the seam from exterior wall to roof – detailing that junction so as to produce the feeling of single, monolithic forms,” the studio said.

Within the 3,000-square-foot (279-square-metre) home, the layout feels clear and fluid.

A central volume encompasses an open-concept kitchen, dining area and living room. Adjacent to that area is the main bedroom suite.

A glazed corridor connects to a private wing, where one finds three bedrooms, each with its own bathroom. A third volume contains a garage.

“The interiors are modernist and straightforward, punctuated by the long, linear views created by those connections between the volumes, and illuminated by large expanses of window,” the studio said. 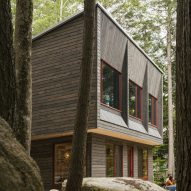 Certain areas were designed with flexibility in mind. For instance, the kitchen – created in collaboration with Seattle-based Henrybuilt – is designed to accommodate a range of uses, from hosting cocktail parties to preparing intimate dinners for two.

The outdoor spaces act as a unifying agent. The grounds were designed with local studio Geoffrey Nimmer Landscapes.

“Outdoor spaces, particularly the covered patio, create cohesion by drawing the spaces together and re-articulating some of the interior details,” the studio said.

Other residential projects in the Hamptons include a long, barn-shaped house by Birdseye that is wrapped in wooden slats and a secluded, low-lying house by Jerome Engelking that was designed to avoid metaphors and “overt symbolism”.

The photography is by Conor Harrigan.