Artworks by Andy Warhol, Lucian Freud and more can be seen throughout The Audley pub and its restaurant in London‘s Mayfair, designed by architecture studio Laplace.

The venue occupies a listed five-storey building dating back to 1888, which formerly functioned as a pub with rooms for staff upstairs.

Now, the ground-floor public house has been restored while the upper levels were converted into the Mount St Restaurant, complete with four private dining rooms.

The renovation was commissioned by Artfarm – the hospitality company of Hauser & Wirth founders Iwan and Manuela Wirth – with the aim of upgrading the pub’s interior while preserving its original features.

“The word Audley is English Anglo-Saxon for ‘old friend’ and the pub has been an old friend to people who live and work in Mayfair ever since it opened in Edwardian times,” said Artfarm’s CEO Ewan Venters. “We wanted it to remain just that.”

“This area is so rich in culture and history, and where better for those stories to continue than at the local pub?”

French studio Laplace was selected to lead the pub’s redesign, having already worked on a number of Hauser & Wirth’s international art galleries including its outposts in Somerset and on the Spanish island of Menorca.

In the ground-floor pub, the studio freshened up the woodwork and brought in a team of specialists who, over the course of eight weeks, hand-polished almost every surface of the interior.

Restoration work was also carried out on The Audley’s 19th-century clock and fireplace, and a new chestnut-brown leather banquette was installed.

The ceiling is now covered in a newly commissioned collage by British artist Phyllida Barlow. It comprises brightly coloured sheets of paper that were pasted into an abstract pattern, at points forming arch shapes that mimic the curvature of the pub’s windows.

More artworks by the likes of Turner Prize-winner Martin Creed and Canadian artist Rodney Graham were mounted on the walls.

The Audley sells traditional pub snacks while in the upstairs Mount St Restaurant, a full menu of classic London dishes is on offer.

This first-floor space is jam-packed with art pieces including a self-portrait by Lucian Freud, a lobster print by Andy Warhol and an abstract landscape by painter Frank Auerbach that depicts London’s Primrose Hill. 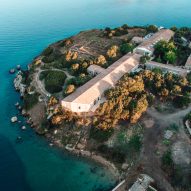 The floor is taken over by a bold mosaic created by American artist Rashid Johnson and made up of different types of marble. Another American artist, Matthew Day Jackson, is responsible for the crimson-coloured dining chairs with wriggly frames.

Art also inspired the restaurant’s finer details; the salt and pepper shakers are modelled after Paul McCarthy’s playful sculpture Tree while the lamps that centre each of the leather-topped tables are based on Swiss artist Sophie Taeuber-Arp’s work Powder Box.

“We have created coherent spaces in which art and design flow naturally, avoiding the pitfalls of obsolete artistic or aesthetic statements,” explained Laplace.

On the building’s second level is The Swiss Room, designed to celebrate the nationality of Iwan and Manuela Wirth, who founded Hauser & Wirth together with Ursula Hauser in Zurich in 1992.

Here, the parquet oak floor was stained brown, red and teal-blue to emulate a watercolour by Taeuber-Arp.

Nearby is the Italian Room & Bar, which draws on the aesthetic of grand palazzos. Its walls are painted a rich mustard-yellow hue, while deep-green Verde Alpi marble from Italy was used to craft the countertop of the bar and the flooring.

The building’s third level accommodates The Scottish Room with a nine-metre-long oak table at its centre surrounded by hand-carved chairs, each inlaid with a custom tartan designed by weaver Araminta Campbell.

Finally on the fourth level is The Games Room, which Laplace styled to have the feel of a “clandestine enclave”.

It features tasselled ceiling lamps, a blood-red tufted sofa and a one-off rug made by Laplace in collaboration with the former assistant of French-American artist Louise Bourgeois.

London’s affluent Mayfair neighbourhood is a hotspot for bars and restaurants.

Among them is the recently-opened Bacchanalia, which features giant mythology-inspired sculptures by Damien Hirst, and The Red Room bar inside The Connaught Hotel, which is designed to feel like an art collector’s home.

The photography is by Simon Brown unless stated otherwise.