Built on the site of a former garage in the Thorburn Square conservation area, the architecture studio aimed to draw heavily on the areas “sensitive” location for the design of Southwark Brick House.

An existing brick wall, which Satish Jassal Architects describe as “intrinsically part of the place”, was retained and encloses the site.

The studio wanted to integrate the wall in the home to anchor the home within the site. The house is entered through the wall and it supports one side of the new structure.

“We placed the house below and behind the front wall and on top of the sidewall. By interacting with the wall in this way, we looked to anchor the new house into its place,” he told Dezeen.

“The building is pulled back from the street edge and the lower portion of the house is hidden behind the historic boundary wall, which was retained and underpinned.”

The wall is visible from within the homes and in the kitchen, it has been left exposed.

The studio chose to use red Ibstock West Loathly Sharpthorne bricks to complement the existing brickwork and integrate the house into its surroundings in Bermondsey.

“The rough and imperfect texture of the bricks gives the building a worn appearance and makes it feel like an established part of the streetscape,” said Jassal.

“The red Ibstock West Loathly Sharpthorne bricks used across the building were chosen to compliment, whilst at the same time contrast with, the existing yellow London stock brick wall and the golden tones of the oak-panelled windows.”

The three-bedroom house has three levels, with a ground floor that was lowered one metre into the ground to give the occupants privacy from neighbouring properties.

This ground floor contains kitchen and dining areas that open onto outdoor terraces. 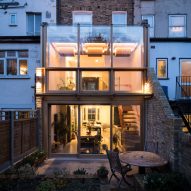 On the first floor above, living areas feature large bay windows that provide views onto the red and white striped housing estate opposite.

The home’s bedrooms are located in a basement floor, which is illuminated by a linear light well.

A blackened steel and glass staircase runs down the core of the house underneath a skylight and timber chandelier.

Two brick wings with double-height oak widow bays have been positioned on either side of the staircase with views of the tree-lined street.

“Elements of the local building vernacular, such as blank gables, flat-edged roofs and vertical timber windows, are acknowledged and incorporated into the façades in a contemporary way to complement the conservation area,” said Jassal.

Other recently built brick houses in London include Alma-nac’s House-within-a-House, a home with a grey-brick skin.