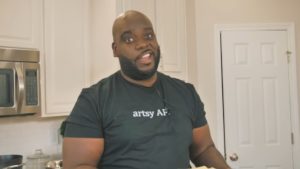 Williams currently boasts at least 1.4M followers on Facebook. His online store reflects that his Dining With Darius Cooks 2022 Tour is sold out. Tickets are listed at $215.00 each.

“I just can’t believe it. Dining With Darius Cooks is back! In 30 days, we will start a 26-event run for 2021. Shout out to everybody who has tickets. And ALL of 2022 is completely sold out. Can’t wait to hug y’all’s necks. I can’t add more seats. There’s no more room on the calendar to add another date. And nope, I can’t squeeze you in because there is physically no space. Tickets for 2023 go on sale in April 2022. New menu. New schedule. Same vibes. Y’all ready?!” a message on Facebook read.

Hoodies, cookbooks and t-shirts are also sold there.

But despite Williams’ success which is illustrated in ample Internet spaces, individuals such as Kiara Ross, who was reportedly an Atlanta Soul Crab restaurant server, turned to social media recently and other public forums to make shocking claims that the cooking guru once assaulted her and dragged her.

In fact, even a well-known Food Network star, Sunny Anderson came forward and “Scripps Media  lodged a copyright complaint against the restaurant owner to make sure he isn’t tied to one of the Food Network’s popular personalities, Sunny Anderson,” according to WSBTV’s report in 2020,

“I hope in the near future he is not able to gain ad revenue on YouTube from this and then also use this as a way to substantiate himself in a business where we see he has some questionable practices,” Anderson said, according to WSBTV.

A clip of celebrity  Anderson and Williams allegedly “disappeared “ amid the copyright complaint which was intended “to distance Anderson, a former host, from Williams’ brand and new restaurant controversy.”

Williams suddenly shuttered “Soul Crab Atlanta and Chicago and the Westview’s Greens and Gravy,” amid reports that the restaurant owner owed “the state of Georgia for an illegal credit repair business.”

Now, Anderson has taken to social media once again to air out her grievances and put Williams on public notice.

Williams’ fans are weighing in on the widely discussed matter, in addition to more women who are making allegations.

In one of the most damning claims, a woman named Angela (@kitchenista) also turned to social media to voice concerns about Williams, while encouraging others to come forward about the controversial public figure.

The Kitchenista has claimed Williams, “has been accused of assaulting a woman, ripping off investors, running an illegal credit repair scheme, unpaid wages, and much more. These accounts go all the way back to 2008 and the stories/tactics have remained consistent to the present day. This is not a personal vendetta. However it is worth noting that this same person has used my brand name to profit on merchandise in retaliation – as much as $110k, reported by Darius himself.”

BLACK ENTERPRISE reached out to Williams but has not heard back.

Southwark Brick House peeks above a brick wall in Bermondsey

The McClure Twins Launch Their Book Debut With 'Make It Fashion'