Sports for the Adrenaline Junkies

Paragliding is one of the most extreme sports in the world. It is played competitively and for fun, both. In paragliding, a wide canopy is attached to the body of the paraglider and it is connected through a harness. This allows them to glide through the air after jumping off an area of high altitude. Like all adventure sports, this is a dangerous activity but it is played by many people around the world. Here are sports like Paragliding.

Today, we will look at some of the most dangerous sports that are played around the world:

1) Running of the Bulls:

This is a tough, tough sport. A large group of people is exposed to bulls that wreak havoc. While the risk of being hit by a bull is relatively low, the bulls are quite ferocious and contact with one of them could be fatal due to their horns and sheer power. It requires agility and presence of mind to avoid contact and survive.

BASE jumping is another sport for the daring. It involves jumping from a fixed area or spot and using a parachute to descend to the ground. The BASE in the BASE is an acronym that stands for: building, antenna, span, and earth (cliff). After a period of freefall, you activate the parachute and then descend safely to the ground. It is one of the most dangerous sports on Earth and it has fatality or injury rate 43 times higher than that of parachuting from a plane.

I don’t know about participating in this, but even just looking at someone participating can give me the chills. It would be an understatement to say that this is not for the weak-hearted. Highlining is done at an extremely high altitude and it challenges the participants to be strong mentally and physically. There are unexpected gusts of wind which can make the experience a lot trickier and although there are safety precautions taken, it is still tough because the climb back to the spot becomes very difficult. Anyone trying this must have nerves of steel. 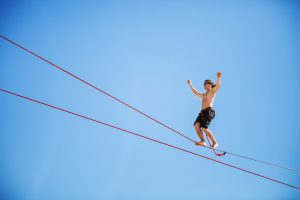 Parachuting and/or skydiving is probably the most played air sport, ever. It is a completely action-packed sport that involves jumping from an aircraft and descend to Earth using the pull of gravity and the help of a parachute. It is played competitively either through the solo flight on a jump in the formation of a hybrid. This is a very daring sport, and a lot of people have lost their lives. However, to improve safety, jumpers wear two parachutes, one in reserve just in case the other one does not open. There are a number of things the jumpers compete in from accurate landing, canopy formation to style, etc.

On the outlook, it looks easy and a lot like rock-climbing, which most people have done. It requires agility, strength, endurance, and a lot of preparation, and even after that, a lot of people fold early. The climbers are always at risk of an unforeseen occurrence. This increases the risk and the sport itself takes place on unreliable surfaces. A lot of times you cannot predict the surface and it could lead to a fall. This is ranked very high on high-risk sports and it is not advised to be done without a lot of preparation and practice.

As the name suggests, this is a suit that you wear which increases the surface area of the human body as it contains pieces of fabric covering the space between the legs and between the arms and the body. To end the flight, a parachute is deployed. So, you can basically deploy it any time you want. Plenty of jumpers have set multiple records. However, it is one of the most dangerous sports, ever. According to a Colorado University study, wingsuit flying leads to a death or serious injury for every 500 times it is attempted. 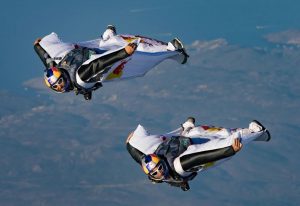 Volcano boarding or volcano surfing ranks high on our list. It almost begs the question of why do people even do it? Well, adrenaline junkies fear nothing and this is something that is participated in, quite a bit! Potential hazards of participating in volcano boarding include falling off the board, getting cut by the volcanic ash, breathing in poisonous gas, or even being hit by molten lava. As it is performed on the slopes of the volcano, the risk of falling is very high. However, the boards are made to bear the risks.

It is getting really scary, now! Heli-skiing is a sport where the skier is flown to the top of a remote mountain-side by helicopter and skiing is done on the slope of the untouched and very remote snow-capped area. As these areas are usually far away from human inhabitation, the risk of injury and unforeseen circumstances is also very high. The helicopter ride to such a high altitude is also considered to be dangerous and weather changes can make it a tough experience. It also requires a lot of skill to maneuver in a terrain that you have not seen beforehand. 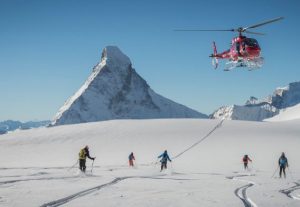 Creeking is a branch of kayaking and canoeing, but a very dangerous one. It involves participants jumping off waterfalls in special-designed kayaks that can withstand the environment, but it requires a lot of skill. The risks involve crashing into the rocks or being pulled off track by the strong water currents. 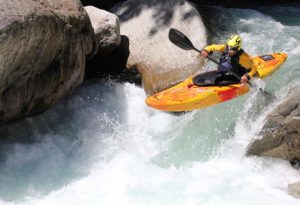 While this seems like a fun game, bungee jumping is one of the most extreme sports, ever. A person jumps from a great height while they are connected with a large elastic cord. The adrenaline can be felt throughout the body and it is done quite a bit around the world. While bungee jumping is not played competitively, thrill-seekers do try to beat the records of the highest jumps, ever made. 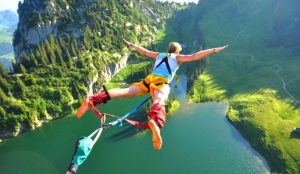 We hope you enjoyed the list of extreme sports, if you believe you have the ability to conquer them, you should try one of these!

Why was reddit soccer streams banned? Will it be retrieved?