Designer Stephen Burks has unveiled five lockdown prototypes, including podiums for digital devices and a chair that screens you from your surroundings, in a retrospective exhibition in Atlanta, Georgia.

Developed by Burks at the height of the coronavirus pandemic, the Shelter in Place Project is a series of designs that explore new ways of interacting with the home at times of global crises.

The designs are among 50 works on show in a major exhibition of the designer’s work, also called Shelter in Place, at Atlanta’s High Museum of Art.

Burks describes them as “funny experiments at accommodating the everyday changes this new way of living brought upon us”.

“The Shelter In Place project is a direct expression of our lives during lockdown,” said the Brooklyn-based designer.

“It uses the framework of radical design to question traditional ways of living,” he told Dezeen.

The first prototype Burks made was Spirit House, a miniature house that offers space for displaying photos and objects, as a form of memorial for lost loved ones.

Ritual is also a key element of The Ancestors, which takes the form of an abstract figure.

Created by the African-American designer to offer a sense of belonging, it references the Afro-diasporic ritual of keeping symbolic statuary at home.

“The concept refers to how these objects of often unknown origin carry immeasurable meaning for a people who cannot trace their ancestry but who undoubtedly feel spiritually connected to precolonial African histories and ways of being,” said Burks.

Private Seat is a chair that provides the sitter with separation from people and activities taking place around it – for reading, taking private calls, meditating or just being alone.

The Supports provide stands for digital devices at seated and standing heights, while the Woven TV offers a customisable frame for a large television screen.

“We questioned if there could be another way engaging with this black box, to make it come alive and reflect our consumptive practices in the same way that the ‘recently watched’ tab on Netflix or YouTube indicates our digital preferences,” said Burks. 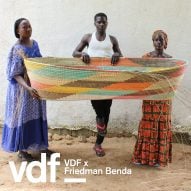 The High Museum’s exhibition surveys 10 years of work by Burks, who operated under the moniker Readymade Projects before rebranding his studio Stephen Burks Man Made.

The Shelter in Place Project, which developed in response to discussions between Burks and curator Monica Obniski during the pandemic, takes centre stage.

Other notable aspects of the retrospective include Broom Thing, a tactile “ambient object” made from 26 brooms, the characterful The Others lanterns, and the woven Dala seats.

He hopes to show how craft can play a role in “industrial and even digital contexts”.

“The goal of our work is to extend craft traditions into the future by asking such challenging questions of both the industry and society at large,” said the designer.

“The global crises that we’ve found ourselves in have had a lasting impact on how we see design and its role in society,” he added.

“We’ve entered the age of design following meaning. It’s clear now that we all have a role to play in design’s social and ecological responsibility.”

Stephen Burks: Shelter in Place is on show at the High Museum of Art in Atlanta from 16 September 2022 to 5 March 2023. See Dezeen Events Guide for more architecture and design events around the world.