Computer modelling was used to design the angular wall surfaces of Rotterdam‘s newest theatre, to ensure a completely even distribution of sound.

Theater Zuidplein is a major new cultural venue for the Dutch city, housing two auditoriums, a restaurant and a library.

While the building was designed by architecture firm De Zwarte Hond, experimental office Studio RAP was tasked with shaping the interior of the main theatre.

Working with engineering firm Arup, Studio RAP’s ambition was create a wall surface design that optimises the acoustics of the 600-seat auditorium.

Using digital technologies, they developed an extremely multi-faceted surface that is calculated to bounce sound evenly across different parts of the interior.

“The project was designed using algorithms, which resulted in a rippling ocean of thousands of triangles,” said Wessel van Beerendonk of Studio RAP.

The design process involved simulating a wide variety of different types of performance – across theatre and music – and measuring the effect of different curvatures on the reflection of the sound.

The next step was to transform this organic shape into something easy to manufacture. This involved dividing up the entire interior into approximately 6,000 triangles. Some of the triangles are flat, while others are folded.

“The result is an even distribution of sound across the entire auditorium, so that every member of the audience can fully enjoy the show or concert they came to see,” said Studio RAP. 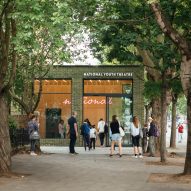 These triangles are made from aluminium-composite, in a bold shade of red that gives the auditorium a distinct identity.

This is emphasised by the differences in light and shadow across the panels, due to their varying orientation. The effect is further amplified by the seating upholstery, which is also various different shades of red.

The auditorium’s other features include a versatile layout, designed to adapt to a varied programme of performances.

For events where guests stand or dance, it’s possible to convert part of the stage area into additional space for spectators. The ground floor and balcony can also be separated off thanks to a moveable wall.

Both the main theatre and the smaller auditorium are located in the side of the building that faces the bus and metro stations, to act as a noise buffer for nearby residential buildings.

The building has a masonry structure, with a facade that curves outward to create a curved recess.

“By day, the semi-open facade creates a beautiful play of light inside, and by night, the facade illuminates from within to highlight the inviting entrance,” said De Zwarte Hond.

The building’s lobby, with interior design by BURO M2R, was imagined as “a living room for Rotterdam-Zuid”.

“The high lobby forms the heart of the building,” said De Zwarte Hond. “Every function is directly or indirectly connected with this space, where there is always something for people to do and discover.”

Theater Zuidplein’s auditorium was longlisted for Dezeen Awards 2021 in the civic and cultural interior category.

The category winner was MuseumLab, a lightning-struck library converted in a children’s museum in Pittsburgh.