A truncated stone pyramid containing a study stands in one corner of the introverted Takamine-cho House, designed by Tomoaki Uno Architects in Japan‘s Aichi Prefecture.

Located in a green residential district in Nagoya, the stone and concrete dwelling takes cues from the pyramid of Tenayuca, an Aztec pyramid in the Valley of Mexico.

It was designed by local studio Tomoaki Uno Architects for a client who wanted a home built using traditional dry stone construction methods.

According to the studio’s founder, as this form of masonry construction is traditionally only used in Japan “for the foundations of castles, castle foundations, and stone walls”, he turned to Aztec architecture for ideas.

“I felt pretty uneasy and uncomfortable about using this traditional Japanese masonry as part of a building with a different purpose,” Tomoaki Uno explained.

“I couldn’t get rid of the awkward feeling that I was trashing the tradition, and a lot of time passed without being able to propose,” he continued. “It was the pyramids of Tenayuca that brought me out of this impasse.”

Protruding from one corner of the home, the pyramid sits next to a central courtyard and water garden, around which the rest of the inward-looking concrete home has been arranged.

“The overall plan is to give a feeling of openness to the rooms while protecting the private space surrounding the two gardens,” explained Uno.

The upper level of Takamine-cho House has an L-shaped plan containing a living, dining and kitchen area, which overlooks the courtyard through glass curtain walls.

On the home’s lower floor there is the main bedroom, alongside four smaller bedrooms that are arranged around a garage. 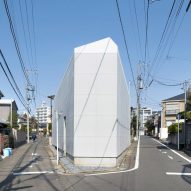 Apart from the glazing overlooking the courtyard, the home contains only a few small windows, opting instead for a series of small skylights in its exposed concrete ceilings.

The pyramidal study is accessed internally through an opening in the living space, or directly from the street where a projecting concrete opening sits at the top of a staircase.

Inside, it is lined with concrete panels and has a concrete fireplace. A skylight and an opening overlooking the water garden provide natural lighting.

Set against the concrete and stone, black ironwork has been used for the courtyard doors and, internally, for the handles of sliding wooden doors and stair balustrades.

In the basement, the bedrooms are brightened with warm pale wood elements such as shelves and cupboards.

Tomoaki Uno Architects was founded by Uno in Nagoya in 1990. Other recent projects by the studio include Ogimachi House, a pared-back and therapeutic home built almost entirely from wood to create a “healing” atmosphere.

The photography is by Yasuo Hagiwara.

50 Restaurant Rewards Programs That Are Worth Joining