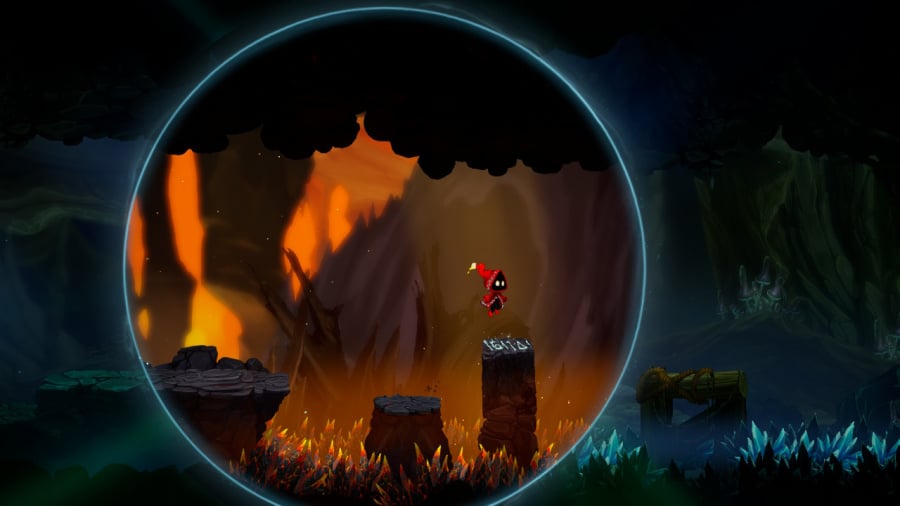 Portals have always been cool, right? Valve’s own genre-defining Portal remains to this day one of the greatest FPS games of all time, and we’re sure even the most firm critic of the MCU can’t watch the Endgame portal scene without feeling just a little bit emotional. Unbound: Worlds Apart makes smart use of portals as a foundation for its puzzle platforming, resulting in a solid adventure that’s unfortunately held back by an unstable framerate.

You play as Soli, a mage who bares more than a striking resemblance to FFIX’s Vivi. Soli’s world and reality is collapsing from a relentless evil, forcing him to utilise various portals to navigate a mysterious and dangerous land to save his home and people. On the way, he’ll come across a multitude of friendly characters complete with their own quests and backstories. The world building here won’t win any medals, but there’s enough to keep you intrigued and invested for the duration of the game.

And what a beautiful looking game, too. The hand-crafted visuals are stunning throughout, and the contrast of colours between the parallel worlds creates some excellent screenshot opportunities. The main downside to this is the instability of the framerate, which tends to struggle even in the quieter moments with no enemies or characters present to cause any unnecessary strain. We’re hoping this will stabilise with updates in due time.

The gameplay itself focuses almost entirely on the portals, the first of which essentially opens up a bubble into a parallel world, allowing you to utilise platforms that otherwise might not be around. On the flipside, benign creatures roaming about the normal world can morph into grotesque monsters if you catch them within your portal, so you’ll need to be careful when and where to activate them.

As you progress further you’ll open up new abilities using the portals, including one that inverts the world’s gravity, thus allowing you to essentially fly up to the ceiling and back down again at will. The game opens up a bit more at this stage, incorporating elements of the Metroidvania genre with branching paths and unlockable areas, paying particular homage to games such as Ori and the Blind Forest.

In terms of difficulty the game ramps up the challenge fairly early on, but its puzzles nearly always feel manageable enough to avoid any unwanted frustration. You’ll spend quite a lot of time dying towards the end of the game but its checkpoint system is incredibly generous, meaning you’ll always spawn just prior to your place of death.

With its unique use of portals, Unbound: Worlds Apart is a great platform title with a flutter of Metroidvania in the mix. The framerate can be a tad annoying, chugging along at frequent intervals, but thankfully it’s never quite disruptive enough to ruin the experience. If you like portals (and come on, who doesn’t?), then this is definitely a game worth checking out.