Dutch studio Unknown Architects has completed a cabin-like holiday home in the Netherlands with panoramic windows for looking out at the surrounding landscape of dunes and hills.

Aptly named House in the Dunes, the home has a steeply pitched roof and simple cross-laminated timber (CLT) and steel structure informed by the surrounding buildings in Terschelling in the Wadden Islands.

While from a distance the dwelling looks like a simple single-storey cabin, Amsterdam-based Unknown Architects sunk the concrete base of the building into the dunes, creating an additional floor and a sheltered terrace space.

“The house aims to be modest and expressive,” said the studio. “By making use of the terrain of the dunes we could make a larger lower ground floor where two bedrooms, a bathroom, storage and technical space are situated,” it continued.

The resulting building is a stack of three distinct levels – a concrete base, a central form of CLT and steel surrounded by panoramic wood-framed windows, and a steep, asymmetric pitched roof clad with Accoya wood planks.

These materials were chosen for ease of construction and the way that they will age and weather over time, meaning the window frames and roof planks will blend into the landscape as they slowly turn grey.

“The majority of the house is prefabricated to reduce construction time on site and limit the impact on the surrounding area,” explained the studio.

“The elements of the pigmented concrete base have been cast in the factory, while the ground floor and roof construction are built out of CLT, making this the first CLT construction in Terschelling,” it continued. 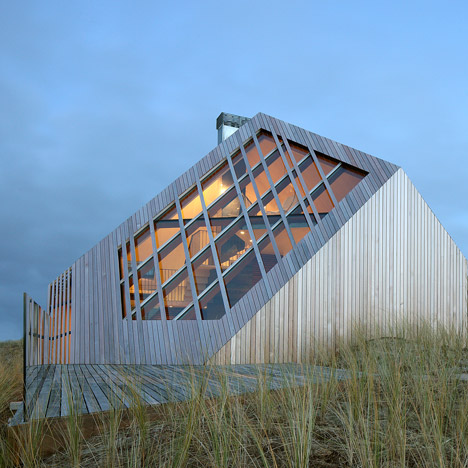 In House in the Dunes’ plywood-lined living space, the high-pitched skylit ceiling and 360-degree views create the feeling of being in the landscape. A built-in bench sits beneath the windows wraps around the interior and doubles as storage.

A central wooden block demarcates the kitchen and bathrooms and separates them from the living area, while also creating a mezzanine level directly beneath the roof’s skylight.

Below, the bedrooms, bathroom and entrance hall have been finished in white with smaller square windows framing views out onto the dunes.

Unknown Architects was founded in 2012 by Daan Vulkers and Keimpke Zigterman. Previous projects by the studio include the renovation of an apartment block in Amsterdam, where red-painted steel columns have been used to open up a series of previously compact living spaces.

Another home that is embedded into the sand dunes of Terschelling is a beach cabin by Amsterdam-based studio Marc Koehler Architects, which has a crystalline form clad in a combination of glass and red cedar.

The photography is by MWA Hart Nibbrig.

Ways to Protect Your Retirement Savings After Quitting Job