A scalloped metal roof and brightly coloured accents feature in a renovation and extension of a 1960s home in Melbourne by local architecture studio Wowowa, which has been shortlisted in the residential rebirth category of Dezeen Awards 2021.

The layout was also reconfigured to improve the relationship to the garden.

“The plan was arranged along a double-axis – a prominent post-war design driver to increase connection to the garden, creating a front, back and central courtyard,” explained the Wowowa.

“Our design exaggerated the existing axial plan through a clip-on colonnade.”

This “clip-on colonnade” extends the axis along the rear of the home and is defined by a run of glazed brick columns framing large windows, creating a bright corridor space that connects a new strip of children’s bedrooms.

Above, the scalloped roof structure is expressed internally by a wooden ceiling that sweeps “like the belly of a whale” above this new corridor, referencing the construction of boats.

“The structural design, cladding and construction methodology for the roof form was not dissimilar to the construction of a boat, with a keel, bow and stern,” said the practice. 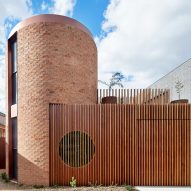 Moving the children’s bedrooms to this wing freed up space within the original footprint, which now contains a large en-suite main bedroom to the south alongside a new sitting area, connecting via the entry hall to a large kitchen, living and dining area.

Designed to be the heart of the home, this central space is organised around a bright yellow table and counters, with a “desert inspired” colour palette expressed through terrazzo splash backs and pastel pink cabinets.

“Reflecting their personal aesthetic through form, materiality and colour, the interiors are an accretion of small moments of delight that allow a family to find a quiet moment alone or come together,” described the practice.

Sliding doors to the north connect to a new courtyard created by the extension, allowing the living and dining areas to open out onto an area of raised decking.

“Each axis has the capacity to be closed from the next, allowing a separation of the noisy living spaces from quiet adult areas and children’s study zones,” it continued.

The colourful accents in the kitchen extend into the new bedrooms, where pinks and yellows have been used to finish doors and furniture.

Previous projects by Wowowa include a home in Melbourne with cylindrical brick turrets and copper cladding, designed to reference agricultural buildings.

Other projects shortlisted in the residential rebirth category of the 2021 Dezeen Awards include Šilta Šiauré’s charred timber clad block of holiday apartments and Matt Gibson’s renovation and restoration of a Melbourne home.

Do I Get My Ex's Lottery Money if We're Still Legally Married?