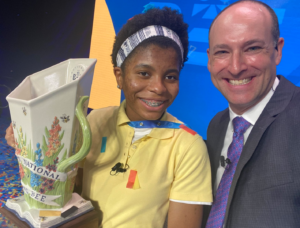 Zaila Avant-garde of Louisiana just made history as the first African American person to win the Scripps National Spelling Bee. She claimed her victory in round 18 after she correctly spelled “murraya,” a genius of tropical Asiatic and Australian trees.

As the national champion, Avant-garde is walking away with a $50,000 cash prize, medal, Scripps Cup, the official trophy, and other sponsor prizes.

The 93rd competition took place at ESPN Wide World of Sports Complex in Orlando, Florida on Thursday evening. Eleven students from seven states and the Bahamas competed during the final event.

“Zaila demonstrated incredible mastery of the English language with poise and perseverance,” said Adam Symson, president and CEO of The E.W. Scripps Company, in a statement. “The excellence of all of our competitors, their hard work and commitment to learning, and their distinct stories, capture hearts and minds across the globe.”

Launched in 1925, the Scripps National Spelling Bee is the longest-running educational competition in the country, Symson noted. Every year, millions of students across the country come together to compete for the coveted spelling bee title.

Zaila Avant-garde, an eighth-grader attending Clover Lane Homeschool, was one of 209 national qualifiers. With the sponsorship of the New Orleans Chapter of The Links, she was able to excel in three virtual competitions in June to secure her spot at the national competition. This was Avant-garde’s second time competing in the Scripps bee, starting her journey in 2019 after she requested to participate in a spelling bee for her 12th birthday, Nola reported.

Although she didn’t make it to the finals in 2019, Avant-garde was determined to compete again. In 2020, she took home the grand prize at the Kaplan Virtual Spelling Bee. She used her $10,000 cash prize to purchase study materials and hire 2015 Scripps runner-up Cole Shafer-Ray as her private tutor.

“For spelling, I usually try to do about 13,000 words (per day), and that usually takes about seven hours or so,” Avant-garde told Nola. “We don’t let it go way too overboard, of course. I’ve got school and basketball to do.”

Her hard work paid off. Avant-garde achieved her goal of winning the Scripps National Spelling Bee this year. This means that she’s adding another accolade to her collection of awards. At only 14-years-old, she’s already set three Guinness world records. In 2019, she earned her first record for the most bounce juggles with three basketballs.

What’s next for the young spelling bee champ and basketball phenom? She aspires to attend Harvard University and play in the WNBA. She’s also considering a career at NASA. With a multitude of talents on her resume, Avant-garde’s career options will be plentiful.