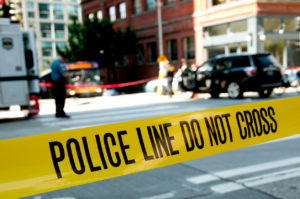 Three people were left injured outside of a local Houston barbershop over the weekend following a shooting over an old foot race.

The drama started between two men who were arguing over who won an old foot race and it ended with three people being shot, ABC 13 reports. Police responded to reports of a shooting outside Mean Kutz barbershop in Northeast Houston around 3 p.m. on Saturday.

“3 adults were shot & transported to area hospitals with apparent non-life-threatening injuries,” the Houston Police Department said in a tweet. “Suspect fled the scene on foot.”

Prelim info is 3 adults were shot & transported to area hospitals with apparent non-life-threatening injuries. Suspect fled the scene on foot.

HPD Assistant Chief Wendy Baimbridge said the argument started between two men in their 40s who were arguing over which one of them won a foot race they previously ran.

“There were two males that were arguing outside the barbershop here over who ran a race faster,” Baimbridge said, as noted by ABC News. “So at that point, one of the victims started walking away from the argument. The suspect then shot him twice in the shoulder.”

There were two innocent bystanders located inside the barbershop who were also struck in the shootout. One was hit in the rear end while the other was shot in the arm, police said. All three victims were transported to the hospital to be treated for non-life-threatening injuries.

The suspect behind the shooting fled the scene in a black Nissan Frontier. Authorities do not have the license plate number at this time.

“I just came to get a haircut but that didn’t go as planned,” one woman who witnessed the shooting said.

Police have gathered evidence from the phone of an eyewitness as well as surveillance footage from a liquor store located next to the barbershop. They are looking into the footage as they work to track down the shooter.

Baimbridge said the suspected shooter was described as a Black man in his 40s who goes by the name Trae.

The Fendi Caffe features a psychedelic twist on the brand's logo