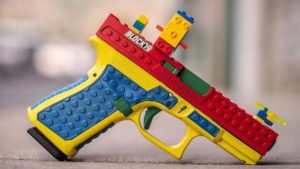 50 Cent is one rapper who is speaking out against guns being promoted to the youth.

The “Get Rich or Die Tryin” hitmaker recently called out Culper Precision, a Utah-based gun company that crafted a Glock 19 that comes with a case that can be built out of Lego blocks.

Dubbed the “Block 19”, the gun is customized to feature red, yellow, and blue Lego-like pieces on the barrel and the grip to make the firearm resemble a toy, the company’s president, Brandon Scott said, as noted by The Firearm Blog.

But 50 Cent is not here for it and blasted the new Glock 19 for seemingly targeting children.

“This looks like they are trying to market guns to the kids,” the “Power” creator wrote in a since-deleted July 14 Instagram post. “This is not ok cops will start shooting little kids playing in the park.”

The company behind the gun unveiled the new firearm last month, Revolt reports. The Block19 serves as a customization available to people who already own the “Gen 3 or 4 Glock 19.” Prior to releasing the toy-looking gun to the general public, only people who owned the Gen 3 or 4 or Glock 19 could trade those guns in for Block19 for “around $600.”

“Here’s one of those childhood dreams coming to life, the Block 19 prototype, yes you can actually build Legos onto it,” the company said while unveiling the toy-looking gun on Instagram.

In response to the Block 19, Lego sent Culper Precision a cease-and-desist letter, Washington Post reports. Since issuing out the legal warning, the gun-making company has noticeably removed the Block 19 from their website.

“They had a similar reaction to you,” Scott explained about Lego’s response to the gun. “Where it was like: ‘Is it wise to make a gun look like a toy?’”