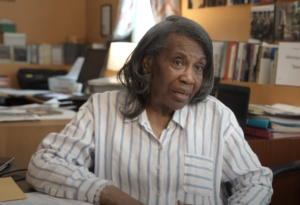 Gwen Levi, a 76-year-old woman who was taken back into custody, due to failing to answer calls while taking a computer class was released on Tuesday,” according to The Baltimore Sun’

Folks, the fight is NOT OVER. Let’s get the other 4,000 home permanently.#KeepThemHome pic.twitter.com/YIhD2W4fEC

According to the article, court documents showed that a federal judge grant the grandmother a “compassionate” release and a reduced sentence to time served. WTOP further stated that Levi and some “24,000 nonviolent inmates were  permitted to serve the remainder of their sentences in home confinement last year,” to prevent the spread of  COVID-19 in prisons. It was under a decision which was made via the Trump administration. Levi was an inmate who had been selected to do so, according to WTOP.

According to the outlet, in Judge Deborah Chasanow’s compassionate release request which was filed by Levi’s lawyer, the judge “noted that Levi had done well in home confinement previously,” while considering “Levi’s age and medical history as a cancer patient in her decision.” Levi’s lung cancer is in remission, per USA Today’s report.

The woman’s lack of phone response was due to her belief that approval was given for her to attend the class, Levi’s attorney said, according to USA Today. When she powered off her cell phone, she was “unaware that officials at her halfway house would be calling her.” As a result, the incident was regarded as an “escape,” so “Levi was arrested four days later.”

According to The Washington Post, Levi served “16 years of a 24-year sentence for conspiracy to sell at least one kilogram of heroin,” upon being sent to home confinement in June.

“The criminal justice system is designed to rehabilitate offenders for successful reentry to society, yet individuals like Gwen Levi are regularly confronted with the burdens of their faults after serving time. Following Gwen’s early release from prison last year, the 76-year-old chose to rewrite her story by volunteering for advocacy organizations around Baltimore. But while grace is a rare occurrence, judgment in America flows abundantly. Gwen recently made national headlines after being sent back to prison for failing to answer her phone during a computer class,” Scott said in a statement. “This lack of patience and empathy was wrong, and I am overjoyed that a U.S. District Judge ordered Gwen’s release this afternoon. I look forward to welcoming Gwen to City Hall in the near future and encourage everyone to keep fighting to build a government that truly sees the good in its people sentence to “time served.”

Gwen Levi’s heartwarming reaction to being released from jail and also her message to her many supporters. pic.twitter.com/mrhcsINt3W

Intellivision's Tommy Tallarico Wants To Follow In Nintendo's Footsteps, But Will He Get His Chance? - Feature