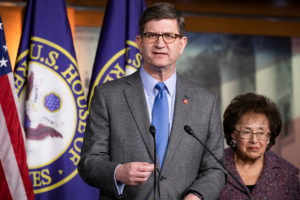 Patrice Campbell, the only Black staffer for Rep. Brad Schneider (D-Ill.) is suing her employer, claming her supervisor made a comment about lynching and reporting it led to race-based retialation against her.

In the suit, which Campbell, who serves as a constituent services representative, filed last Thursday in the U.S. District Court for the District of Columbia, her supervisor Karyn Davidman, “created an intolerable hostile work environment” against Campbell due to her race.

Campbell’s lawsuit states in early March, Davidman was telling a story about constituents using lanyards to keep face masks around their necks and told Campbell, “You are going to have to get a rope and put it around your neck.”

The next day during a virtual meeting, Davidman told Campbell to turn her camera on and retold the story and “laughed hysterically,” according to the suit. Campbell added that Davidman called her after the meeting and made more comments telling Campbell “You should have seen your face when I told that story!”

“It is against office policy to discuss specific details about internal personnel matters. To be clear, the Office took prompt and appropriate corrective action to address Ms. Campbell’s initial complaint,” Fri However, the federal lawsuit filed today by Ms. Campbell does not provide a complete or accurate representation of the issues or her treatment by any office personnel.

“The Office looks forward to responding to Plaintiff’s allegations in Federal Court at the appropriate time and is confident that it will be exonerated in due course once all the facts are known,” Fried added.

According to Campbell’s suit, Davidman has a track record of racist behavior. Campbell said Davidman took few constituent requests frem minority communities and when Davidman did take requests from Black constituents, she assigned the work to Campbell, making her feel like the “Black people representative” in her office. The suit added Davidman favored White employees and made frequent “off-hand comments that are, at best, racially insensitive, if not outright discriminatory.”

Campbell states in the suit that Davidman was given a week of paid administrative leave after the March incidents, and was told she would no longer supervise Campbell. However, Campbell said Davidman assigned her work anyway with the office’s district director serving as an intermediary.

Campbell was so distraught by the situation and Schneider’s response to the incidents, she took a month of unpaid leave  in April and worked a reduced schedule the following two months, according to Politico.