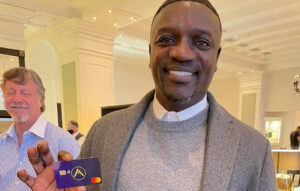 R & B singer and crypto entrepreneur Akon has officially released his very own crypto card. The African entertainer took to Instagram to share the news with his 7.6 million followers.

“It’s Done,” he wrote last week. “The official AKOIN Card!!! Which allows you to now spend your AKOIN (AKN) were ever master card is excepted. I’m sure you can’t freely spend your crypto in any of your favorite stores right? Well you can with AKOIN (AKN) so grab yours now on BitMart.com before we expand to the major exchanges.”

According to Revolt, the Ugandan government said it has allocated one square mile of land to Akon and the city, which is expected to be completed by 2036 and will operate on Akon’s cryptocurrency, AKoin.

Previously, BLACK ENTERPRISE reported on the entertainment mogul’s plans to create a Wakanda-like city in his home country of Senegal. In September he announced that his company had begun construction of the $6 billion development project.

“We are looking at Akon city to become the beginning of Africa’s future,” said the rapper at the special ceremony to celebrate the start of construction of the city, according to CNN. “Our idea is to build a futuristic city that incorporates all the latest technologies, cryptocurrencies, and also the future of how African society should become in the future.”

Beyond his work as a singer and songwriter, Akon owns two clothing lines, Konvict and Aliaune. He also founded the Konfidence Foundation with the mission of empowering disadvantaged youth in Africa and the United States.