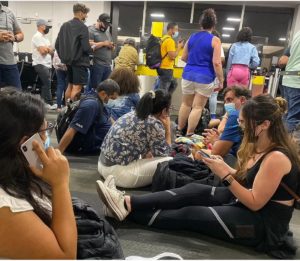 American and Spirit Airlines are under fire after leaving thousands of travelers stranded in airports following a string of canceled flights.

American Airlines Group Inc. and Spirit Airlines Inc. canceled nearly 700 more flights Tuesday amid reports of issues caused by weather and technology shortages, Bloomberg reports. But with the latest string of cancellations, many are speculating if the real issue is staff shortages.

More than 300 scheduled American Airline flights were canceled one day after they grounded 563 flights, as noted by FlightAware. Spirit canceled 380 flights on Tuesday after parking 334 flights on Monday due to weather and technology concerns. The string of canceled flights comes amid a surge of travelers looking to get away for the summer.

In addition to the weather and tech concerns, both airlines dealt with staff shortages after crews reached the maximum number of work hours following a series of delays where reserve corps halted.

“Staffing has been a problem,” said Paul Hartshorn Jr., a spokesman for the Association of Professional Flight Attendants at American. “Our flight attendants are being scheduled and rescheduled to the max.”

Both airlines had been experiencing delays that kicked off on Sunday when Spirit canceled about 19% of its scheduled flights, NPR reports. Meanwhile, American Airlines has attributed its canceled flights to severe weather issues in Dallas-Fort Worth.

“The nine-hour weather event resulted in flight delays, cancellations and nearly 100 diversions. Our team members are working around the clock to care for our customers.”

Over on Twitter, Spirit attributed its canceled flights to “operational challenges in some areas.”

We are experiencing operational challenges in some areas of our network. Before going to the airport, check your email and current flight status here: https://t.co/yuPJDPxeNu. The fastest way to receive assistance is to visit our webchat: https://t.co/QnlZcUCMtk. pic.twitter.com/E176h8KHjN

A spokesperson for Spirit confirmed the cancellations came after a series of severe weather, outages, and staff shortages.

“In responding to these challenges, Spirit has implemented some proactive cancellations again today to reset our operations,” Spirit spokesperson Field Sutton said. “Most of our flights currently remain scheduled as planned.”