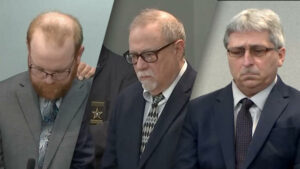 As the three men convicted of killing Ahmaud Arbery prepare to face federal hate crimes charges, attorneys on both sides of the case have asked a federal judge to allow them to select the jury from a wider pool.

In the state court case during which Gregory McMichael, Travis McMichael and William “Roddie” Bryan were found guilty of murder and aggravated assault, 1,000 potential jurors were summoned from Glynn County – the area immediately surrounding Brunswick, Ga., where Arbery was killed.

The three men’s defense attorneys have filed a joint motion with the prosecution requesting that the judge presiding over the federal case expand the jury selection area, 11 Alive reports. They have asked to be allowed to select jurors from the federal court system’s entire Southern District of Georgia.

The district comprises 43 counties, including the larger coastal cities of Savannah and Augusta.

According to ABC News, standard practice would have seen the federal jury pool drawn from Glynn County, where the trial will take place, along with 6 surrounding counties. However, the proposed larger selection area includes towns and cities as much as four hours away by car.

“The parties believe that it is likely that many potential jurors from the Brunswick Division will have experienced sustained exposure to the case and may have formed immutable opinions, in one direction or the other, that will ultimately preclude them from sitting on a jury in this case,” read the motion filed Dec. 9.

In addition to the expanded jury pool, Travis McMichael’s attorney Amy Copeland also asked the judge to consider relocating the trial, preferably to Augusta or Savannah.

The judge is expected to deliver his ruling on both motions in the next pre-trial hearing, scheduled for Dec. 20. Jury selection in the federal case is due to start on Feb 7.

A sentencing date for the state’s case has not been announced. However, per Georgia State laws, all three men are expected to be sentenced to life in prison.

With Green Monday, Find Out Your Dog's True DNA Make Up At A 20% Discount.

When It Comes To Boxing, Fighter’s Health Is More Important Than Anything