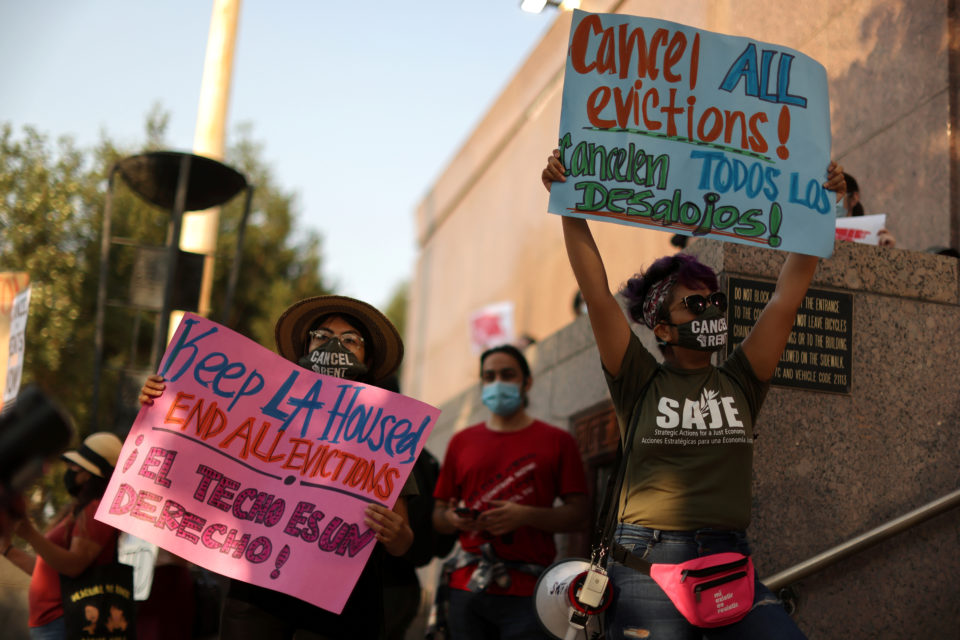 Protesters surround the LA Superior Court to prevent an upcoming wave of evictions and call on Governor Gavin Newsom to pass an eviction moratorium, amid the global outbreak of coronavirus disease (COVID-19), in Los Angeles, California, U.S., August 21, 2020. REUTERS/Lucy Nicholson


WASHINGTON, July 29 (Reuters) – U.S. President Joe Biden asked Congress on Thursday to extend a moratorium on evictions to protect millions of U.S. renters and their families that is set to expire this week amid a deadly rise in coronavirus infections, the White House said.

The Centers for Disease Control and Prevention (CDC) said last month it would not extend the eviction moratorium past July 31. The CDC did not immediately comment on Thursday.

More than 15 million people live in households that are currently behind on rental payments, according to a study by the Aspen Institute and the COVID-19 Eviction Defense Project.

Those 6.5 million households collectively owe more than $20 billion to their landlords. The Treasury Department earlier this month cited U.S. Census Data saying approximately 1.2 million households had reported being very likely to face eviction in the next two months.

Last month, the U.S. Supreme Court voted 5-4 to leave in place the CDC’s ban on residential evictions imposed to combat the spread of COVID-19 and prevent homelessness during the pandemic.

“In my view, clear and specific congressional authorization (via new legislation) would be necessary for the CDC to extend the moratorium past July 31,” wrote Justice Brett Kavanaugh, who was one of five justices who voted to leave the moratorium in place.

White House spokeswoman Jen Psaki said “given the recent spread of the Delta variant, including among those Americans both most likely to face evictions and lacking vaccinations, President Biden would have strongly supported a decision by the CDC to further extend this eviction moratorium.”

But she added “unfortunately, the Supreme Court has made clear that this option is no longer available.”

Some states have chosen to extend eviction moratoriums beyond July 31 like New York, whose moratorium extends through Aug. 31.

Biden also asked the departments of Housing and Urban Development, Agriculture, and Veterans Affairs to extend their respective eviction bans through the end of September, the White House said, to protect Americans living in federally insured, single-family properties.

Congress has allocated $46.5 billion in federal rent relief, but only a fraction of that has been released by states. The apartment group said it forecasts there will be an additional $26.6 billion in unpaid rent on top of the money allocated by Congress.