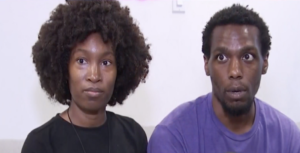 A Black Los Angeles couple that had an emergency home delivery of their newborn were questioned by the doctors and the police.

Kayla Love gave birth to her daughter Fari Love Jones with some complications during the delivery process.  When paramedics came to her home, they determined the baby was healthy, but they took Love to the USC Medical Center examination, NBC 4 Los Angeles reported.

Love stopped USC doctors’ from drawing her daughter’s blood, saying she wanted her private physician to examine her child.

“We said no. We prefer our child to be seen by a private physician. We don’t want your services, and we reserve the right to deny,” Love said.

Allegedly, Love’s refusal led doctors to be critical of her relationship with partner, Khari Jones, getting the LAPD to ask inquires about domestic abuse, and she was questioned whether or not she had hepatitis.

After the couple was discharged later that night, “between 10 and 15 officers came up in our home, pointing guns at me while I’m holding the baby! Over a Health and Wellness check, what they claim to be,” Jones told NBC Los Angeles.

The LAPD were called because the USC Medical Center said in a statement it is its duty to “investigate the safety of the home environment.”

“When there are concerns about the health and welfare of a minor, our medical staff have obligations to report such matters to appropriate social welfare authorities so they can investigate the safety of the home environment,” the statement read.

State Sen. Sydney Kamlager, whose 30th District is where this incident took place, wants answers just like the parents.

Kamlager is expecting a follow-up from the USC Medical Center and LAPD later this week.

“This is predatory. They are just going for people they feel can be a victim. They didn’t know who they were dealing with. We are not letting this slide,” Love said.