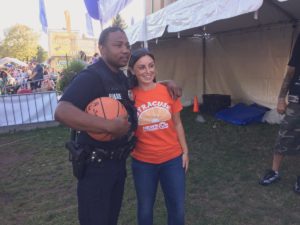 Officer Brandon Hanks is a well-known law enforcement officer, a bridge between the Black community and the Syracuse Police Department.

However, when Hanks filed a racial discrimination lawsuit against his co-workers for “extreme racism” he experienced on June 25. Days later on July 1, the department reprimanded him for posting a video of himself listening to rap, according to Syracuse.com.

Some might consider the department’s action as retaliation for the lawsuit, But Police Chief Kenton Buckner says the main issue is that a Black man was involved in using “racial slurs… in the language with our officer on a personal Facebook post.”

It is worth noting that Hanks was in uniform inside his private car, and the incident was discovered in February. The videos or social media posts in question are not on Hanks’ Facebook page, nor were they included in Hanks’ amended complaint.

The song in question uses epithets like “ni–a,” a commonality in most rap songs, which goes against the department’s social media policy, according to First Deputy Chief Joseph Cecile, who signed the letter of written reprimand addressed to Hanks.

“It’s pretty clear. Then for those who will say there are First Amendment rights, the law has been very very clear that there are some restrictions for law enforcement,” Buckner said.

Hanks’ lawyer, Jesse Ryder of Ryder and Charles Bonner, clarified that Hank was not the one who played the song in the car and said the department is retaliating against their client and is trying to make a big deal out of his musical preference.

“As a result of social media posts that came to Syracuse Police Department’s attention in March 2021, Officer Brandon Hanks was issued a written reprimand for violating the department’s social media policy,” she said. “The reprimand was approved by Chief Buckner in early June, and prior to the filing of the notice of claim by Hanks’ lawyers on June 23, 2021.”

For those wondering about Hanks’ lawsuit, Hanks said that he was denied a promotion to a specialty unit after a captain wrote that Hanks is “gang-affiliated,” according to ABC 9 Syracuse.