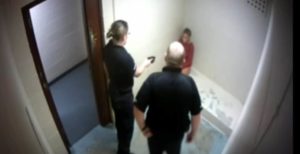 People are outraged over a recently released video that shows a woman who was arrested being forcibly stripped down in front of a group of male officers.

Ariel Harrison, a 31-year-old disabled mother of three, was arrested for allegedly drunk driving, Vice News reports. A shocking video shows what happened after Harrison was taken into an Illinois jail where she was held down and forcibly stripped naked in front of male officers.

The officers claim Harrison wasn’t cooperating and they only forcibly undressed her after she failed to follow their orders. But Harrison claims she didn’t want to undress because she was afraid of being sexually assaulted and the officers should have never arrested her to begin with.

Now, Harrison is speaking out against the McDonough County Sheriff’s Office and the Macomb Police Department over claims she was subjected to false accusations and a non-consensual strip search during her DUI arrest, VICE reports.

“When they pulled me over, they didn’t really explain to me, they just pulled me out of my car,” Harrison recalled.

The incident stems from Harrison’s arrest on Oct. 26, 2019. Police pulled her over and claimed that she was driving recklessly. She was accused of driving under the influence, but Harrison, who’s blind in her left eye, says she was never given a breathalyzer test and was tased multiple times before being thrown in the back of a police car and hauled off to jail.

“I’ve never done wrong. I’ve never messed with the law,” Harrison said. “I came down here to Macomb to let my kids live and be free. But now my kids have been taken from me, and I have these cases against me.”

A Change.org petition has since been launched asking for support in getting Harrison’s charges dropped.