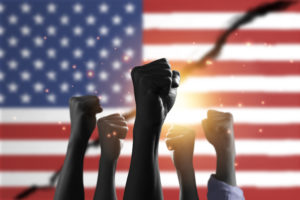 In the post the group said the flag is a symbol the BLM organization and those who waive and support the flag see the country differently than the Utah BLM chapter does.

Lex Scott, the founder of the BLM Utah told the Salt Lake Tribune, the post was meant to generate a reaction and show how the flag has become a symbol co-opted by extremist groups. Scott was angered by the far-right organization, the Patriot Front, marching and carrying the flag through Philadelphia last week.

“We are seeing that symbol used in every racist hate group’s messaging across this nation. The problem that I have is no one is addressing the people who are using it for hate. I am telling you when I see an American flag, I begin to feel fear for the simple fact that every time I am faced with hatred, it is at the hands of someone carrying an American flag.”

Utah Sen. Todd Weiler, a Republican, disagreed with Scott’s messaging, calling the U.S. Flag a symbol of unity and perseverance.

“The vast majority of Utahns, regardless of their race or politics, continue to look to the U.S. flag as a symbol of unity and perseverance for our nation’s past —and hope for our nation’s future,” Weiler said according to The Hill.

Scott isn’t the only one who feels this way however. A New York Times report from last week detailed how some who still embrace the flag have been viewed and judged as White supremacists or far-right supporters. Peter Treiber Jr., who owns a potato truck with the flag painted on the side in Long Island, NY, told the times trouble selling produce to a customer until he let her know about his liberal political views.

“She said, ‘Oh, whew. You know, I wasn’t so sure about you, I thought you were some flag-waving something-or-other,’” Treiber, 32, told the Times. “That’s why she was apprehensive of interacting with me.”

Treiber said after the interaction, he began to reconsider keeping the painting on his truck.