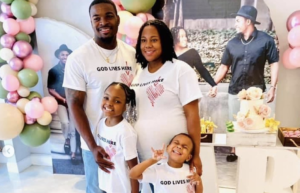 A Missouri mother is singing her 9-year-old daughter’s praises after she bravely helped her mom deliver her baby sister.

On June 29, Aakayla, 9, was honored by her mom, Angelica Gunn, on Instagram. The proud mom thanked her daughter for helping to safely bring her baby sister, Aubree Rose, into the world on June 28.

“Our 9-year-old helped deliver baby girl at home… We didn’t make it to hospital, and Aubree Rose was born at home on 6/28, 7lbs, 9oz 19 inches,” Gunn wrote on the social media platform.

The young mother, who had previously miscarried, wrote about Aakayla’s bravery amid chaos.

“All I can tell y’all is that God kept us in those moment. He gave me strength to fight through it and Kayla strength to help bring our baby earth-side…we are beyond proud of our daughter and her heroic efforts. I desired a natural birth, and that is what God allowed to happen in the comforts of our own home.”

She also highlighted how sometimes God has another plan.

“Though, it’s not what we had planned. It’s what God orchestrated and anointed us for…Thank you to my husband Caleb Gunn though, despite his efforts to get there fast enough, he came rushing in moments later along with paramedics and has been by our side, loving on us as he always does and making sure we are all safe and taken care of…. 3 angels in heaven and 3 angels on earth, you can’t tell me God doesn’t look out for his people… We are proof,” Gunn added.

She also thanked her sister for helping with the process.

“Thank you to my sister for staying on the phone with us and for the matching robe and swaddle set. We absolutely adore JaMisha HisGlory Davis,” the young mother continued.

“I am still very much in shock, disbelief and very emotional about it all.”

Gunn, who is a certified doula and nurse, also had an interview with Good Morning America to discuss what happened.

She recounted the moments before Aubree Rose came into the world.

“I just screamed for my daughter [Aakayla] to come in,” she said. “I was like, ‘Something’s happening, you’re going to have to look and tell me what’s going on because I don’t know.’ I kind of just felt intense pressure and like [the baby’s] head was coming out.”

She also expressed that her husband was at work, and she was alone in the house with Aakayla and her  4-year-old son.

Gunn admitted she was nervous about putting the responsibility of birthing a newborn on her 9-year-old, but Aakayla showed up and out for her mom and sister.

“I think in that moment she realized, ‘OK, it’s just me and mommy. I’m going to have to help her because daddy’s not here,’” Gunn recalled, proudly. “It’s kind of just amazing how she did that. She didn’t cry. She didn’t freak out or anything.”

Paramedics arrived at the home shortly after Gunn gave birth. Mom and baby girl were taken to a local hospital where they recovered and are flourishing.