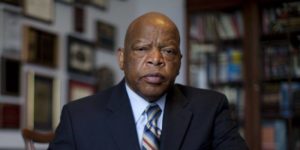 A statue of the late John Lewis was unveiled last Wednesday at the new 16-acre Rodney Cook Sr. Park in Atlanta’s Vine City, according to The Atlanta Journal-Constitution.

The civil rights leader and congressman passed away last year. The statue will help to pay homage to the legend who died at the age of 80 after a cancer battle. The civil rights leader was “the son of sharecroppers who survived a brutal beating by police during a landmark 1965 march in Selma, Alabama,” per CNN’s report. Lewis participated in dangerous work to take a stand for change and fight against segregation.

59 years ago today I was released from Parchman Farm Penitentiary after being arrested in Jackson, MS for using a so-called “white” restroom during the Freedom Rides of 1961. pic.twitter.com/OUfgeaNDOm

“My grandfather Eddie made sure that our family was really close,” Adolph Lewis said, per The Atlanta Journal-Constitution’s article. “So when I look at that statue, I just see pride. It just warms my heart to know that I’m part of this family.”

Adolph Lewis Jr. is the late Adolph Lewis’ son. He is “the legendary brother who did all of the future congressman’s chores as a child, so Lewis could read,” according to the report.

Dignitaries participated in a “ceremonial cutting of the ribbon to open the park and christen the statue,” the article said.

Lewis’ statue will be in good company. According to The Detroit Praise Network, “18 bronze statues, plaques and monuments dedicated to peacemakers including [C.T.] Vivian, Andrew Young, Julian Bond and Martin Luther King Jr.” will be added to the park.

Lewis was one of the youngest leaders during the height of the civil rights movement. Lewis and other students founded the Student Nonviolent Coordinating Committee (SNCC) in 1960. Sit-ins at local diners and conducting voter registration efforts and demonstrations throughout the South were among accomplishments noted by The National Park Service.

Today, we honored Congressman Lewis’ memory at his statue unveiling in #VineCity.

Now it’s time for Congress to honor his legacy by passing #HR1 and #HR4 to #RestoreTheVote #ForThePeople.

Is All Fair In Love And Rule 34? The Eternal Debate Of Sex And Modding