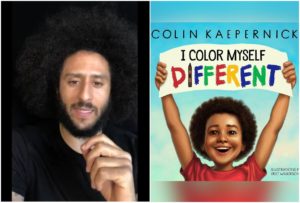 In 2022, the public can expect to hear more from Colin Kaepernick. The former NFL quarterback and Scholastic have announced a multi-book deal that will produce a set of children’s books dealing with topics of race, self-esteem and other social justice themes.

The first book from the set is somewhat autobiographical. I Color Myself Different, a 40-page book for readers ages four through eight, explores Kaepernick’s own experience as a transracial adoptee.

“This story is deeply personal to me, and inspired by real events in my life. I hope that it honors the courage and bravery of young people everywhere by encouraging them to live with authenticity and purpose,” said Kaepernick.

In his premier offering, Kaepernick highlights the first time he drew his White adoptive family with a yellow crayon and chose a brown crayon to draw himself. He was in kindergarten at the time and noted that that was when he first noticed differences, not only between himself and his family but the differences across the human race.

“We knew instantly that we wanted to share his stories, which will be impactful messages of identity and belonging for Black and Brown children,” said Debra Dorfman, vice president and publisher, Scholastic Global Licensing, Brands & Media

Kaepernick gained notoriety when in 2016 he began speaking out against unfettered police brutality toward Black people and knelt during the National Anthems at games. In the years subsequent to his initial outcry, he fought the NFL as it administratively ostracized him.

In the midst of his growing activism, he created Kaepernick Publishing. The company’s site says it aims to give voice to writers with diverse views and voices and spans all genres. The imprint’s first book will be released in October and is titled, Abolition For The People: The Movement For A Future Without Policing And Prisons. A Kaepernick memoir is also planned.

The set of children’s books, published through the Kaepernick Publishing and Scholastic partnership, will be multilingual, offered in print and electronic formats, and will make use of Black talent such as artist Eric Wilkerson for and Scholastic executive editor Andrea Davis Pinkney.

I Color Myself Different is set for release on April 5.