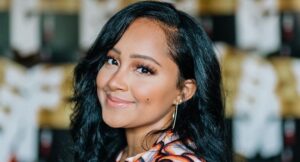 Dana Chanel, the creative behind the Sprinkle of Jesus app and Curl Bible beauty brand, seemingly limits her comments on Instagram amid allegations of her scamming small business owners.

Chanel, whose real name is Casey Olivera, is facing a lawsuit from authorities in Pennsylvania who accused the social media influencer of promoting products to her nearly 800K followers that ripped off customers, BuzzFeed News reports. With much of her following being in the Black community, Chanel is accused of taking advantage of those who supported her the most.

Her Instagram boasts her life as a busy entrepreneur and soon-to-be mother of two. The pregnant influencer shares highlights of her motherhood journey, fulfilling orders for her beauty and haircare company, and also posting paid advertisements as anyone with her following does.

But the Philadelphia-based millennial mogul is being targeted by state officials for one of her other companies that she doesn’t heavily promote online. Chanel’s Credit Exterminators (a family-run business that was rebranded as Earn Company), is supposed to help consumers improve their bad credit.

“She advertised the products of her companies as a way for other black small business owners to achieve what she did. Then, she ripped off the same community she claimed to care about.”

Run by Chanel, her sister, Cassandra April Olivera, and her father, Nakia Rattray, the trio are listed as defendants in a lawsuit that accuses them of taking money from customers not delivering the goods and services they paid for or being misled entirely.

In examples of the complaints, one woman paid a $1,807 deposit to the credit score company for help repairing her credit. It was also supposed to include consulting and coaching. However, after paying and attempting to set up these services, she received no reply and had her request for a full refund denied.

Other complaints say they were told disputes were submitted to credit reporting agencies, only to find out the agencies had no record of the disputes being filed, the lawsuit says.

Chanel’s other mobile app company, Alakazam, is listed in the suit for allegedly charging customers for a “business marketing manual” they did not order or have any knowledge of—and never received the forced order. The Alakazam app is modeled around helping people launch their own apps. But apparently, that’s not what consumers received in return.

“Some consumers who paid monthly hosting fees to Alakazam never received a completed mobile app from the company or received a mobile app that lacked a minimum level of functionality necessary to give the product any value to the consumer,” the lawsuit states.

Now Chanel is in the hot seat and avoiding addressing the suit publicly. The attorney general’s office accuses Chanel of violating five counts of Pennsylvania’s Consumer Protection Law, including failing to deliver goods and services promised, misleading consumers, violating the state credit services law, and failing to register a fictitious company name with the state.

Every Upcoming Animated Series Based On Video Games