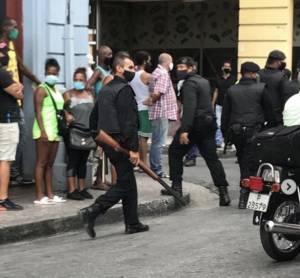 Cubans around the world have come together to stand with their hermanos and hermanas on the island to protest the human rights violation and worsening struggles of their paisanos.

#SOSCuba is a movement that has taken over social media platforms like Instagram. On Sunday, Cubans let go of their fears and spoke out against the communist government. Residents in provinces like Havana and Camaguey have taken to the streets to denounce the country’s growing lack of resources, including food, medicine and other basic needs.

The pandemic isn’t helping conditions on the island. In the last seven days, Cuba’s COVID-19 numbers have risen drastically and the lack of adequate medical supplies has increased the mortality rate.

Cuba’s economy since the pandemic has decreased by 11%, and since 60% of the nation’s food is imported– food shortages are rampant.

Residents have taken to ransacking government-controlled stores to scourge for basic items.

According to France 24, protests in San Antonio de Banos brought out Cubans who have had it with the government.

Gritos like, “Queremos libertad!,” and “No tenemos miedo,” ring through the pueblos.

The publication reported that many of the protesters are young and now that Cubans have access to social media– the revolution is being televised.

Sanctions by former U.S. Dotard-in-Chief Donald Trump have not helped. In November 2020, Trump banned remittances to Cuba by Western Union. President Joe Biden has yet to repeal the egregious law.

Hashtags like #SOSCuba are calling for the world to examine the need for foreign intervention. Citizens and Cuban influencers and entertainers alike are appealing to the Cuban government to put aside its pride in order to help Cubans on the island.