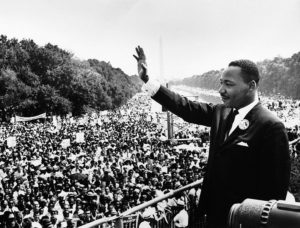 A statue of the civil rights leader Rev. Dr. Martin Luther King Jr. was spray-painted with graffiti and defaced in Long Beach, CA, according to The Los Angeles Times.

“Police responded to a report of vandalism Friday about 3:15 p.m.,” per the news report. The graffiti was removed by a city cleaning crew and an investigation is underway. KTLA’s account of events provided additional details about the appearance of the statue after it was vandalized.

The Long Beach Police Department is investigating it as a hate crime https://t.co/qHtujJJCs8

“A photo posted to social media shows the civil rights icon’s statue sprayed with what appears to be a swastika and SS Bolts,” KTLA reported.

On Monday, the Long Beach Police Department informed the news station that the vandalism incident “is being investigated as a hate crime.” Long Beach’s mayor Robert Garcia tweeted about the disheartening incident.

I released this statement over the holiday weekend about the horrific vandalism at our Dr. Martin Luther King Jr. statue. MLK is a hero and inspiration. We are investigating this hate crime and are focused on arresting whoever committed this awful act. https://t.co/VLgitL7xwd

In another tweet posted by Mayor Robert Garcia’s Office, the Rev. Martin Luther King Jr. statue was described as “a symbol of hope and justice for the community.”

“This hate and desecration has no place in our city,”  an additional tweet also read.

According to Garcia’s spokesperson, the mayor and police department, as well as community leaders are discussing steps “to install security cameras near the statue,” per CNN.

“Our hearts were broken when we saw the posts on social media,” Mary Simmons, who was the event’s cohost  said, according to the news report. “We can stand by and do nothing, or we can stand up against it.”

They're Back! All Six New Edition Group Members Headed on Tour, Now With New Management