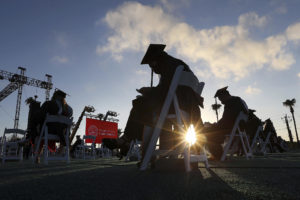 Some in Biden’s Administration are joining a quickly growing list of congressional Democrats and education advocacy groups pushing the White House to continue the pause on student loan debt for more than 40 million Americans.

The White House has yet to make a decision of if it will restart payments, which was paused last March due to the coronavirus pandemic. Education Department officials have suggested one more extension through January 2022 according to Politico.

President Biden has eliminated student loan debt for millions of borrowers, however most of that is for borrowers who were defrauded by for-profit colleges. Some White House advisors are pushing for another extension in order to give the Education Department, which is tasked with managing the $1.6 trillion borrowers owe, more time to ease borrowers back into paying.

Meanwhile, others believe extending a pandemic-era program will be looked down upon during a time when the administration’s messaging about the country’s recovery from the coronavirus.

The Pennsylvania Higher Education Assistance (PHEAA), a national student loan servicer, announced Thursday it will exit the federal student loan servicing business in December of this year. In the past PHEAA has been accused of providing inaccurate information, flawed payment processing and mishandling paperwork.

Sen. Warren, who has previously called on the Education Department to fire PHEAA, said in a statement to Yahoo Finance borrowers can now breathe a sigh of relief.

“Millions of loan borrowers can breathe a sigh of relief today knowing that their loans will no longer be managed by PHEAA, an organization that has robbed untold numbers of public servants of debt relief and was recently caught lying to Congress about its atrocious record of fines and penalties,” Senator Elizabeth Warren (D-MA), who has called on ED previously to fire PHEAA, ” Warren said.

Education Secretary Miguel Cardona has not chosen a side on whether to extend the student loan debt pause, only saying it’s a possibility.

“We recognize the impact that the pandemic had on our borrowers,” Cardona said during a Senate hearing last month. “Extending the pause is something that we have had conversations about.”

A Sealed Copy Of Super Mario 64 Just Sold For A Record-Breaking $1.56 Million