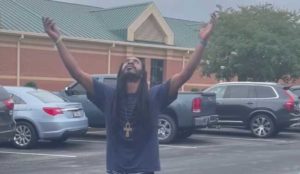 An elementary school custodian in Georgia was surprised with a new car by his co-workers.

In a viral video, the staff member, Chris Jackson, throws his hands up in gratitude as he receives the car in the school’s parking lot.

Jackson, who works at Unity Grove Elementary School in Locust, had been saving up to buy a new vehicle for quite some time. He’d saved up a total of $1,500 to make the purchase, according to WJCL.

His co-workers picked up where he left off and bought him a new ride.

In the video posted to the school’s Facebook page, two staff members walked Chris to the parking lot and handed him the keys.

OH MY STARS: This beloved school custodian named Mr. Chris was saving up for a car. So he was shocked when his coworkers walked him outside, and gave him this surprise pic.twitter.com/zIFYE2RI79

“It was a little bit more, so the school got together and raised the rest of the money, and it’s yours,” one of his co-workers told him as he held the keys in his hand. “We love you, Mr. Chris. We do, we love you.”

“Oh my stars, there is a God. Oh, my stars. Thank you. Thank you all,” he said after throwing his hands up toward the sky. “I thank you all. I thank you all. Oh, thank you! Just to let you know that what they say about people is not real. It is not real,” he said, expressing his gratitude. “This here, I never would’ve dreamt of something like this. This is mind-blowing to me. I’ve seen this on Instagram and Facebook and the internet and been like, ‘Oh, my God.’ If y’all was in my body right now—I can’t move. I’m stuck. I’m really stuck.”

One of the staff members jokingly told him, “You’re never allowed to leave our school now,” as he opened the car door, 11Alive reports.

The school has also helped the beloved staff member secure housing and take care of some utility payments in recent months.

“Unity Grove is a special place, and we are so grateful for the people who are in our lives,” the school wrote in the Facebook post above the video, which now has over two million views.