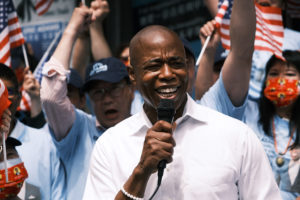 Adams held a slim lead of one percentage point over Kathryn Garcia Tuesday afternoon according to new count of votes which included tens of thousands of absentee ballots. Maya Wiley finished in third place. Wiley, who previously worked for current Mayor Bill de Blasio, was still in the race as of today but fell in the final stretch.

The news service called the race for Adams after the city Board of Elections (BoE) announced he led Garcia by more than 8,000 votes. There are still a few thousand ballots to count, but more than 110,000 ballots to counted Adams leads by a margin Garcia can’t overcome.

The first mayoral primary featuring ranked-choice voting was a memorable and crowded field featuring billionaire Andrew Yang, who led the race early, Ray McGuire, a former Citibank executive, and Non-Profit executive Dianne Morales, the candidate furthest to the left who was done in by staff issues.

The win for the former officer a year of the Black Lives Matter protests and riots hit the city is significant. In a statement

“While there are still some very small amounts of votes to be counted, the results are clear: an historic, diverse, five-borough coalition led by working-class New Yorkers has led us to victory in the Democratic primary for Mayor of New York City,” Adams said in a statement according to the Washington Post. “Now we must focus on winning in November so that we can deliver on the promise of this great city for those who are struggling, who are underserved, and who are committed to a safe, fair, affordable future for all New Yorkers.”

Adams will now face Guardian Angels founder and Republican Curtis Sliwa in the general election. Adams is the heavy favorite and if he wins will become the second Black mayor in New York’s history, David Dinkins who served one term from 1990 through 1993, was the first.

Get 12 Training Courses On Adobe Creative Cloud For Just $34